It hasn’t been a good few days for companies in the oil and gas pipeline business.

The Dakota Access Pipeline, which famously sparked protests at the Standing Rock Indian Reservation during its construction in 2016, will be temporarily shut down and emptied of oil after a federal judge on July 6 ordered regulators to conduct a new environmental review. Despite prevailing in a court case of their own, the companies behind the Atlantic Coast Pipeline, a proposal to transport natural gas across West Virginia, Virginia and North Carolina, announced on July 5 that they had canceled the project.

The developments followed other recent setbacks for major pipeline proposals across the country, including New York’s rejection in May of the Northeast Supply Enhancement project, a 37-mile pipeline that would have stretched across New York Harbor between New Jersey and Long Island. And the string of defeats for the oil and gas industry has environmental activists in Colorado and other Western states hoping that the Jordan Cove Project could be next.

These are all signs of the fossil-fuel era ending   -Pete Kolbenschlag, environmental activist

“These are all signs of the fossil-fuel era ending,” said Pete Kolbenschlag, a consultant and environmental activist who lives in Paonia. “The question becomes how much communities double down on it, or how much they work to move past it.”

Spearheaded by Canadian energy giant Pembina, the Jordan Cove Project and its Pacific Connector Gas Pipeline would cut a 234-mile path across much of southern Oregon, but it has long been championed by oil and gas interests in Colorado, where producers are eager to open up new markets for natural gas extracted on the Western Slope. Linking up with existing infrastructure, the pipeline would enable the transfer of gas from Colorado to a liquefied natural gas (LNG) export terminal in Coos Bay, Oregon, where it could be shipped to China and other emerging Asian markets.

President Donald Trump’s Department of Energy signaled its continued support for Jordan Cove on July 6, issuing an order that formally authorized the export of LNG products from the yet-to-be-constructed liquefaction facility in Coos Bay.

“Today’s export authorization for Jordan Cove, the first U.S. West Coast LNG project, will ease access to further position the U.S. as a top supplier of LNG around the world,” U.S. Energy Secretary Dan Brouillette said in a statement. The order, he added, “encapsulates what the Trump Administration has been working hard on for the past three years — providing reliable, affordable, and cleaner-burning natural gas to our allies around the world.”

But like many other recent pipeline projects, the Jordan Cove proposal has been tied up in regulatory and legal proceedings for years, steadfastly opposed by environmental activists who argue that major investments in new fossil-fuel infrastructure are incompatible with efforts to stop climate change. Despite winning approval from the Federal Energy Regulatory Commission in March — reversing a decision previously made under the Obama administration in 2016 — Jordan Cove has been denied key permits by state officials in Oregon, potentially forcing Pembina to seek federal preemption of the state’s rules in another lengthy and costly round of litigation.

Jordan Cove did not respond to a Newsline request for comment on recent pipeline defeats. But it’s precisely the prospect of such extensive litigation that led Dominion Energy and Duke Energy, the backers of the Atlantic Coast Pipeline, to abandon their project despite a 7-2 Supreme Court ruling in their favor last month. In a press release, the companies said that a “series of legal challenges to the project’s federal and state permits has caused significant project cost increases and timing delays,” with estimated project costs rising from $4.5 billion to over $8 billion as a result.

“This announcement reflects the increasing legal uncertainty that overhangs large-scale energy and industrial infrastructure development in the United States,” said Thomas Farrell, CEO of Dominion Energy, and Lynn Good, CEO of Duke Energy, in a joint statement on the project’s demise.

Susan Jane Brown, an attorney with the Eugene, Oregon-based Western Environmental Law Center, which has challenged Jordan Cove in court, told Newsline in an interview that growing public awareness about the climate implications of large pipeline projects is helping drive this new level of legal scrutiny. And in many ways, she said, the hurdles facing the Jordan Cove development are more substantial than those that ultimately blocked the Atlantic Coast Pipeline and others.

“Some of these pipelines, particularly on the East Coast, are often built in the right-of-way of existing infrastructure, whether that’s pipelines or power lines or some other infrastructure,” Brown said. “What is different about our project is that it’s really virgin territory. It makes it a lot more difficult to authorize and permit those projects, because you are talking about, for example, putting a 200-plus-mile pipeline through the middle of very, very rugged, isolated, forested terrain. And that is difficult, both ecologically and legally, to do.”

That hasn’t stopped interest groups like the West Slope Colorado Oil and Gas Association from pushing hard for Jordan Cove, with the help of powerful political figures from both sides of the aisle. In March, Sen. Cory Gardner called FERC’s approval of the project “exciting progress for Colorado”; his Democratic challenger in November’s election, former Gov. John Hickenlooper, also lobbied federal regulators for its approval throughout his two terms in office. Among the project’s most enthusiastic boosters are business leaders and local government officials in the conservative-leaning Western half of the state.

“It’s a different dynamic,” said Kolbenschlag. “The local politics are a little more difficult, not only because it’s conservative in a lot of cases, but with all the public lands, mineral revenues are such a huge part of local government budgets in ways that I think counties on the Front Range that have property tax bases don’t quite understand.”

Jordan Cove proponents argue that the project could help reduce global greenhouse-gas emissions by enabling China and other countries to retire coal-fired power plants in favor of gas-powered alternatives — a position rooted in the once-popular idea of natural gas as a “bridge fuel” between coal and renewables like wind and solar.

But in the 15 years since Jordan Cove was first proposed, scientists’ warnings about the need to transition from fossil fuels to clean energy have grown increasingly urgent, and climate activists say that the window for major fossil-fuel investments is now firmly shut. With top climate scientists calling on governments to achieve net-zero emissions within the next 30 years, activists fear that costly new oil and gas projects could either lock in excessive levels of emissions or become “stranded assets” that could have severe financial repercussions.

For Kolbenschlag and other Western Slope environmentalists, the risks posed by the Jordan Cove project are too great for a region that has long dealt with the boom-and-bust cycles of fossil-fuel extraction and, thanks in large part to rising temperatures, is currently in the grips of its worst drought in 500 years.

“Fossil fuels as a strategy for the future, economically, has always been a dubious proposition, but it’s arguably insane now,” Kolbenschlag said. “If Western Colorado is serious about transitioning into the new economy, then pinning our hopes on projects like Jordan Cove is just beyond foolhardy.”

For now, Brown and other attorneys on both sides of the Jordan Cove fight are preparing for further regulatory maneuvers and court battles to come. But opponents are increasingly hopeful that an end to major U.S. pipeline approvals may be within reach, marking a crucial turning point in the country’s clean-energy transition.

“It would be great to finally put the nail in the coffin of this project,” Brown said. “This is our third time through this authorization process, and it would be a real victory for a lot of people to finally kill this project once and for all.” 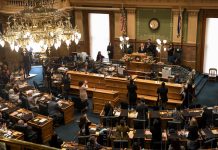 Pipeline projects suffer setbacks across the country. Is Jordan Cove next?

Biden pairs ‘down payment’ on climate crisis with rebuilding infrastructure