On Oct. 8, 2018, Samuel Bouknight was arrested on Colfax Avenue and booked into the Denver city jail for driving under the influence of alcohol.

A pretrial officer then scored Bouknight using a 12-question survey designed to predict whether he would miss his court date or commit a new crime if released from jail. He scored in the top category, he said, likely because of his history of traffic violations. This meant he looked risky on paper. The score may be one reason why the judge set a $750 bond. And as a matter of Denver’s pretrial policy, it was almost certainly why he was required to check in with pretrial services regularly after his release.

Bouknight sat in jail for 59 days before he was able to post bail, he said. And when he got out, the 67-year-old without a driver’s license said he had to travel multiple times per week from his home in the Montbello neighborhood to downtown Denver by bus and train for court-ordered alcohol sobriety tests. These trips, sometimes hours each way, cost Bouknight time and money. He said he had to stop booking new clients for his photography business. He was one misstep from ending up back in jail.

Despite Bouknight’s high score, the algorithm’s predictions never panned out. He never missed a court date and he never committed a new crime, he said. New research indicates that should be no surprise: Bouknight, a Black man, may have been scored by an algorithm that was biased against him.

A July study by the University of Northern Colorado found that the most widely used risk assessment tool in Colorado, known as the Colorado Pretrial Assessment Tool, or CPAT, scored Black people higher than white people even though their odds of missing a court date or committing a new offense were nearly the same. It also inaccurately scored people experiencing homelessness higher than other people, the study shows.

The CPAT’s potential bias may be rooted in the following “risk factors” considered in the 12-question survey: “having a home or cell phone,” “owning or renting one’s residence” and “age at first arrest.” Reformers have said for years these items are less a measure of risk and more a measure of poverty and policing behavior.

“It’s like we’re gonna put a veneer on it and call it data-driven,” said Elisabeth Epps, founder of the Colorado Freedom Fund, an organization that has helped Bouknight and other defendants post bail. “The risk assessment tool is like polishing racism.”

The state-funded study collected data of 3,386 defendants who were scored under the algorithm, which was created in 2012 by counties and criminal justice reform organizations. The researchers used cases from 2015 and 2016 and compared the defendants’ CPAT scores with their experiences after being released. In addition to bias, the study found the CPAT scored 52% of defendants into the highest categories — categories three and four — even though 98% of those released never went on to commit a violent crime. Meanwhile, on average, the tool’s ability to predict future arrests and missed court dates was a little better than that of a coin toss, according to the study.

The tool is used in about two dozen Colorado counties, including Denver. And its apparent racial bias means Black people may be more likely to have to pay higher cash bail amounts, which judges use as an unspoken means to detain people they deem a threat to public safety. And for those who are released, the higher scores mean Black people may end up facing more strict pretrial supervision requirements, including regular check-ins, surveillance, curfews, and sobriety and drug tests. Failure to comply with such bond conditions can result in new charges and even jail time.

This is one of the many reasons criminal justice reformers say Black people are incarcerated in Colorado’s jails at higher rates than white people. In Denver, for example, Black people make up about 10% of the county population but 34% of the pretrial jail population, according to most recent state data.

“We’re more likely to see Black people detained,” said Rebecca Wallace, a staff attorney with the American Civil Liberties Union of Colorado, of the CPAT. “And wrongfully so.”

The results of the study may complicate bail reform efforts in Colorado. Some reformers have viewed risk assessment tools as a way to move away from cash bail, a system in which a defendant’s ability to post bail determines their freedom, to a system in which only defendants deemed empirically threatening to public safety are detained before their trial.

But measuring the kinds of pretrial behavior that criminal justice reformers care most about — whether a person goes on to commit a violent crime or intentionally skips their court date to flee the legal system — is difficult. The study shows that the tool’s predictions for violent crimes were equal to chance. In fact, researchers involved in the study said the tool should not be used for predicting such outcomes.

Meanwhile, nationally, the tools are under fire for their bias. Academics have been sounding alarms for months. And the Pretrial Justice Institute, a Baltimore, Maryland-based organization that once backed Colorado’s risk assessment tool, now opposes the tools due to racial bias. In light of the Colorado study, Sen. Pete Lee, a Democrat from Colorado Springs who for years has sought to pass legislation to expand the use of risk assessment tools, is having second thoughts.

“It’s given me pause,” Lee said. “I think we have a big question mark now as to what really works.”

In practice, however, the tool can be used to get more people out of jail. The number of defendants released under their own personal recognizance, known as a PR bond, in which defendants don’t have to pay cash bail, has increased in several judicial districts since Colorado changed the law in 2013 to start using risk assessment tools, according to the Colorado Commission on Criminal and Juvenile Justice.

Bo Zeerip, the chief deputy district attorney in the 21st Judicial District, said since 2014, after Mesa County started using the CPAT for its pretrial decisions, the county doubled the number of defendants released on PR bonds.

“Having a risk assessment tool helps us do bail reform more quickly, more efficiently, and more effectively. It helped us get along that road in a dramatic fashion,” Zeerip said.

He acknowledges the biases in risk assessment tools. But he said the tools are just one factor among many that pretrial officers, prosecutors, public defenders and judges consider during bond hearings. And take away the risk assessment tool, he said, and you’re left with the subjective view of a judge. Besides, he said, it’s the legal system — not the tool — that’s biased.

“It’s a mirror showing you the history of the system,” he said. To address this issue, he said, “We always have to be vigilant to collect new information — retooling the tools and more training.”

Maureen Cain, a spokesperson for the Colorado State Public Defender’s office, has also long supported the risk assessment tools as a means of getting more people out of jail. But she is concerned the tool scores most people in the top two risk categories. Such scores can lead to intensive pretrial supervision, which can lead to violations of bond conditions, which can lead to jail time.

“The reality is you’re going to make people fail. You have so many conditions that people can’t meet. So many of our clients are just trying to get to their jobs. It’s just a set up,” Cain said.

Reformers said the tools may not be driving down the jail population as much as they hoped they would back in 2013. Statewide, people who have never been convicted of or tried for a crime still make up more than half of Colorado’s jail population, according to the most recent data collected by the Colorado Division of Criminal Justice.

Given these concerns, reformers are doubling down on other legislative changes for the 2021 session. They want to model reforms on the COVID-19 pandemic, during which sheriffs arrested and booked fewer people into custody. Reformers would also like to see the state make it easier for people to show up to court either by giving them a phone or bus tickets or allowing them to appear remotely. They would also like more leniency for those who miss a court date and to require more timely bond hearings.

But these reforms won’t help Bouknight anytime soon. After his day in court earlier this year, he was issued a 60-day jail sentence, the mandatory minimum for a third offense of driving under the influence of alcohol. He still has to go back to the jail for one more day, he said.

Bouknight has no doubts the pretrial risk assessment tool was biased against him. But it wasn’t just that, he said. When he went before a judge for the bond hearing, he said he was fitted in striped prison garb, hands and legs shackled and escorted by a police officer. On both paper and in presentation, he said, he looked like a criminal in the eyes of the legal system.

“I can make a sow’s ear look like a silk purse with my camera. So I’m very aware of presentation.” Bouknight said. “But they just went by what they saw on paper.” 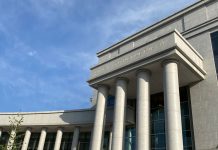 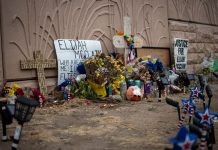 Man shot and killed after ‘Patriot Muster’ in downtown Denver