Colorado’s attorney general, Phil Weiser, said on Monday that he is working with other states to evaluate the “best legal options” to pursue against the Trump administration over the president’s efforts to undermine mail-in voting ahead of the November election.

“We are going to explore all avenues to protect our constitution, to protect the right to vote and to assert the rights of our state,” Weiser said during a press conference on Monday.

Colorado officials — including Gov. Jared Polis, U.S. Sen. Michael Bennet, Secretary of State Jena Griswold, and Denver Clerk and Recorder Paul D. López — appeared during the press conference at the Denver Elections Division to highlight Colorado’s success with vote-by-mail and to push back on President Trump’s attacks against it.

In an interview with “Fox & Friends” on Monday, Trump reiterated that the United States is “never going to have a fair” presidential election if universal mail-in voting is widely allowed. Last week, the president said he was blocking emergency funding for the Postal Service to keep states from expanding vote-by-mail, which he said will lead to voter fraud.

“The president knows exactly what he is doing by making these false claims,” Bennet said. “In other words, he’s put his political future above our democracy and above the safety of the American people.”

U.S. House Democrats are investigating USPS Postmaster General Louis DeJoy and the Postal Service Board of Governors to see if operational changes over the last few months are geared toward slowing down the mail service ahead of the elections. DeJoy is expected to testify before Congress on Aug. 24, according to a Washington Post report.

Since DeJoy was appointed in May, USPS has been criticized for controversial changes he’s made to the agency — including ending paid overtime, transportation cuts and the removal of operating equipment — that have resulted in widespread mail delays.

Members of the U.S. House will return to session on Saturday to vote on the “Delivering for America Act,” which would prohibit the Postal Service from implementing any changes to operations or level of service it had in place on Jan. 1, 2020, according to a letter from Speaker Nancy Pelosi. But the legislation faces an uphill battle in the Republican-led Senate.

Bennet, during the press conference, stressed the need to push back against misinformation from the Trump administration.

“This is a difficult time, but we’ve had difficult times in the past,” Bennet said. “Let’s remember Americans have voted during a Civil War, the Spanish flu, the Great Depression and two world wars. And no matter what the president says, we’re going to vote in November, here in Colorado and all across the country.”

This June, Colorado set a record for the highest-ever turnout for a non-presidential primary, with over 99% of votes cast using mail-in ballots, according to Griswold.

“During the pandemic, we have proven how resilient our elections and democracy truly are,” Griswold said. “We should be proud that in our statewide primary on June 30, we set a record turnout in the midst of a pandemic.”

“It’s important to say that too often, voter suppression is systemic racism,” Griswold said. “And a tool that we have in this nation to battle it is to vote-by-mail.”

The 2020 presidential election is in 78 days. Ballots will be mailed to Colorado voters starting on Oct. 9, and vote centers will open on Oct. 19, according to the Denver Elections Division website. The last day to vote is Nov. 3 by 7 p.m. 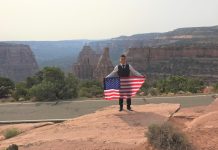