Just 2.32% of COVID-19 tests in Colorado were positive Aug. 16, the lowest rate since the Colorado Department of Public Health and Environment began tracking tests and cases in early March.

Gov. Jared Polis praised the development during a news briefing Aug. 18. He mentioned a rate of 2.18% for Aug. 16, but CDPHE’s numbers were updated later in the day to show a slightly higher percentage of 2.32% — still the lowest since the start of the pandemic.

“This will only keep up … as long as we keep up our exceptional efforts that have been very successful so far: mask wearing, social distancing, avoiding large groups, washing our hands with soap regularly,” Polis said. “Simple things, things that truly Coloradans are excelling at, and that is reflected in the numbers (and) also reflected in our stronger economic recovery thus far than many other states that have been harder hit.”

A low positivity rate doesn’t necessarily mean virus transmission is at its lowest since the outbreak began. Rather, it means the state’s testing resources would appear to be more than sufficient for tracking coronavirus spread in the state — a key benchmark for health officials.

The World Health Organization recommended in May that states and countries wait to begin reopening until they achieve a positivity rate below 5%. As recently as Aug. 5, Colorado’s exceeded that threshold, when around 200 tests were being performed for every 100,000 Colorado residents to show a 5.37% positivity rate.

COVID-19 case numbers are the lowest they’ve been since early July. The state recorded an average of 264 new cases each day for the three-day period ending Aug. 16. A week prior to that, the three-day moving average was 329 cases.

With poor air quality in many parts of the state — due, in large part, to four major wildfires — people with respiratory problems could be more susceptible to experiencing worse symptoms of COVID-19, health officials suggested.

“We are truly indebted for the service and bravery of so many who run towards the smoke and towards the fire to keep us safe,” Polis said at the Aug. 18 briefing.

“There’s only so much that our brave first responders can do, and that’s why I’m asking all Coloradans to be extra careful about fire safety right now given the fact that Colorado is exceptionally dry and exceptionally hot,” Polis said. “Sometimes something as small as a cigarette butt or a spark from a vehicle, a campfire or fireworks can destroy thousands of acres of property, including people’s homes, and cause road closures that can cost our economy millions of dollars.”

When fire chiefs asked this spring for Polis to enact a six-month fire ban statewide, he deferred instead to local control.

In April, Polis signed an order temporarily suspending state statute in order to allow local jurisdictions to implement their own fire bans.

While most affected counties had already issued bans, the new executive order extends through the whole state.

Wildland firefighters are also working to suppress the risk of COVID-19 transmission among crew members, Dan Gibbs, executive director of the Department of Natural Resources, said at the briefing. That includes steps like communicating over radio instead of in person and camping in smaller groups.

“In the past, everyone would be based in a fire camp, for example,” Gibbs said, “and now everyone is based within their own unit, their own pod.”

Instead of being placed in traditional settings like large temporary shelters, wildfire evacuees will be housed in “hotel/motel rooms or college dorms, or other places where we can minimize the risk of COVID,” Department of Public Safety Executive Director Stan Hilkey said.

Polis suggested that health officials were concerned about students returning to college campuses from across the country and potentially spreading the virus. His 10 p.m. last-call order for restaurants remains in place until at least Aug. 21, but the virus could spread easily through private parties.

“What we’re asking here is continued patience, continued forbearance,” he said. “Now is not the time for large get-togethers and parties.” 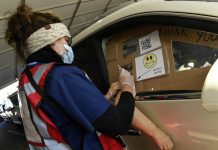 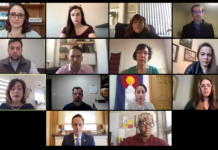 After 10 hours of testimony on public option bill, committee vote delayed till Tuesday