A fossil fuel extraction site is visible near a home in Broomfield on June 24, 2020. (Andy Bosselman for Colorado Newsline)

Within weeks of suffering defeat at the ballot box in 2018, anti-fracking group Colorado Rising announced its plans to fight on, hiring former Democratic State Rep. Joe Salazar to lead its continued efforts to hold what it called “bad government actors and abusive oil and gas companies” accountable.

Now, nearly two years after voters soundly rejected Colorado Rising’s Proposition 112 — which would have imposed a rigid 2,500-foot “setback” distance between occupied buildings and new oil and gas wells — regulators at the Colorado Oil and Gas Conservation Commission are nearing a decision on whether to enact a series of extended setbacks of their own. And once again, environmental activists and industry groups are sparring over whether such requirements are needed to protect health and safety.

“Obviously, it wasn’t settled (in 2018),” Salazar told Newsline in an interview. “The loss of Proposition 112 led to Senate Bill 181, and that in itself requires that setbacks be looked at again. And we know that a 500-foot setback is not in line with public health, safety, welfare and the environment.”

The COGCC’s ongoing, top-to-bottom overhaul of its regulations, dubbed the “Mission Change” rulemaking, is expected to last up to eight weeks and affect nearly every section of its 238-page rulebook, from the paperwork oil and gas companies must fill out to apply for a drilling permit to the soil reclamation they must perform to minimize impacts to wildlife. But no single topic is likely to draw as much controversy as extended setbacks, which have long been opposed by the industry while being championed by environmental and neighborhood groups who say that Colorado’s decade-long drilling boom has encroached far too closely on residential areas in communities across the state.

Familiar battle lines were drawn as the commission began to hear formal testimony on the issue on Sept. 4. Representatives of oil and gas interests argued to commissioners that there is “no scientific reason,” in the words of industry attorney David Neslin, to increase setbacks — and they even submitted privately-commissioned research suggesting that current setbacks could be dramatically shortened without risking public health.

Meanwhile, a diverse array of environmental groups have submitted proposed rule changes of their own, with many supporting a minimum 2,000-foot setback between most buildings and new drilling sites, citing a landmark 2019 study on the health risks of oil and gas development published by the Colorado Department of Public Health and Environment. Colorado Rising continues to support a 2,500-foot statewide standard.

Setbacks were notably absent from Senate Bill 19-181, the sweeping reform legislation passed in the hopes of settling oil and gas issues following the defeat of Proposition 112. But House Speaker KC Becker, a Democrat from Boulder, told the COGCC in an Aug. 24 hearing that lawmakers purposefully left the decision up to commissioners.

“We didn’t include specific setbacks in 181, and that was intentional — it’s not the role of the legislature to dictate specific technical regulations,” Becker said. “But this omission is not a stamp of approval for existing COGCC practices. Under 181, the commission has the authority to increase setbacks based on public health and safety risks associated with oil and gas operations within 500 to 2,000 feet of occupied buildings and consistent with CDPHE health studies.”

As testimony on setbacks began on Friday, COGCC commissioners heard from some of the many Coloradans impacted by drilling near their homes in recent years.

Hundreds of residents in the Anthem Ranch neighborhood, a retirement community in north Broomfield, have experienced negative health effects during drilling operations at a well pad roughly 1,300 feet from the nearest homes, said Susan Speece, a former biology professor and Anthem Ranch resident.

While draft rules proposed by COGCC staff would leave the state’s current 500-foot setback from single-family homes in place, a new provision would prohibit new well sites within 1,500 feet of 10 or more building units, making it less likely that controversial projects in close proximity to the Front Range’s fast-growing suburban communities would be approved.

“This rule makes it clear that careful consideration must be given to siting oil and gas locations to avoid densely developed neighborhoods,” Greg Deranleau, the COGCC’s environmental manager, said in a Sept. 4 presentation. 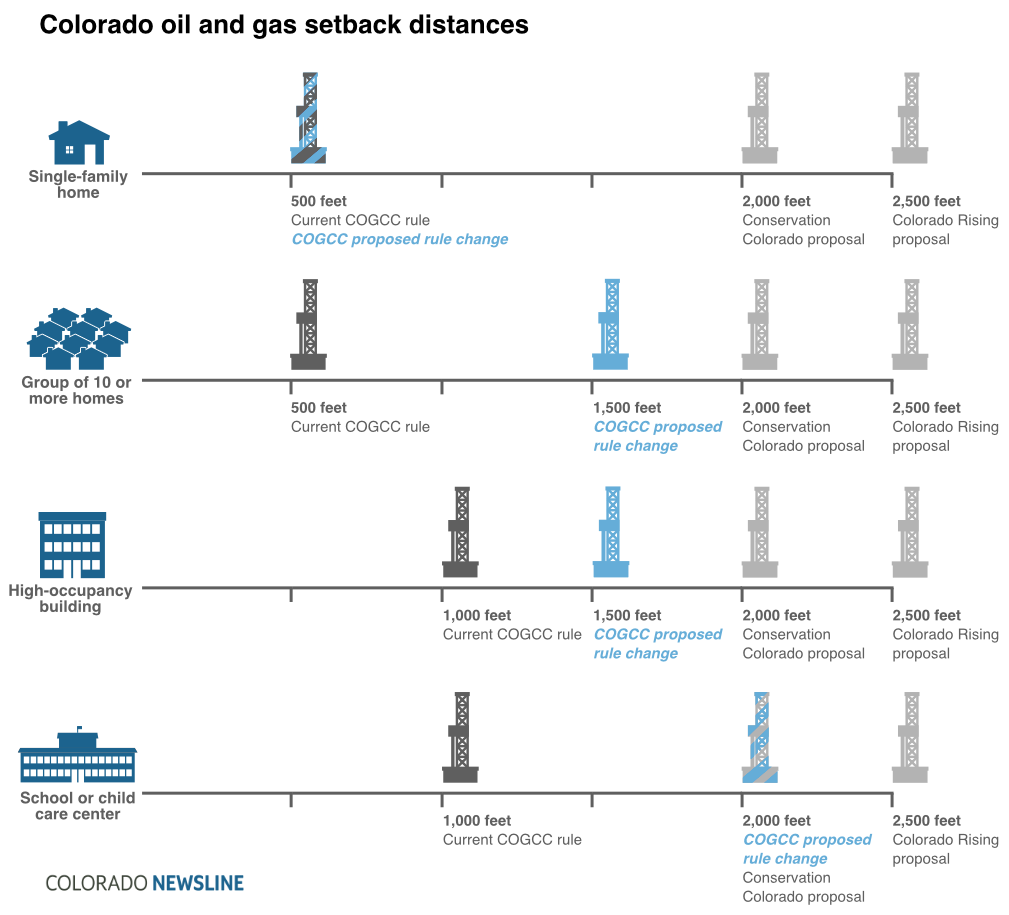 But residents in more rural parts of the state say that they have been affected, too. Janis Butterfield, whose home in unincorporated Weld County was impacted by two drilling projects located 2,000 feet and 750 feet away, told commissioners that she and her family lived daily with noxious odors, oily residues coating outdoor surfaces, and constant noise and Earth-shaking vibrations that damaged her cement driveway and patio.

“The shaking from the constant drilling … stressed the livestock, it stressed the pets, and it stressed us,” Butterfield said. “We work from home, and it was just really hard. You couldn’t hear — you had to go to the bathroom and close all the doors. It was horrible. And the smell was atrocious.”

On Tuesday, Sept. 8, commissioners are also scheduled to hear testimony from Erin Martinez, who lost her husband and brother in an explosion caused by a leak from an oil and gas well near her Firestone home in 2017. Investigators determined the blast was caused by a severed “flowline,” a small pipeline connected to the nearby well. In a pre-hearing statement, Martinez urged the COGCC to adopt setbacks that apply to flowline locations, too.

While the commission passed a new set of rules governing flowlines in December 2019, Martinez wrote, “these new rules … are not a guarantee that gas leaks, releases of gas or oil, or explosions will not occur from flowlines. I therefore urge the Commission to add a flowline setback that would apply to facilities listed in Rule 604 where people live, work, or congregate.”

The COGCC’s proposed 1,500-foot setback would also apply to certain “high-occupancy buildings,” including hospitals, nursing homes and apartment buildings. Industry groups are open to the agency’s proposed rules — as long as a clear waiver process is in place, said Mark Matthews, an attorney with Brownstein Hyatt Farber Schreck, who is representing the Colorado Oil and Gas Association in rulemaking proceedings.

“I think that our members would consider the 1,500-foot setback within the proposed rules with a couple of understandings and conditions,” Matthews told commissioners on Sept. 4. In addition to waivers, industry groups want the commission to narrow its definition of “high-occupancy buildings” to exclude smaller apartment buildings.

The 1,500-foot standard, however, is less than the minimum distance being sought by most of the state’s environmental groups, including Conservation Colorado and the League of Oil and Gas Impacted Coloradans, a grassroots organization that has battled the industry for years. Commissioners are tentatively scheduled to begin formal deliberations on setbacks later on Tuesday, with the first set of Mission Change rules changes set to be finalized by next week.

“The impacts of oil and gas development on Colorado neighborhoods are long past proven, and applying strong setbacks and stringent requirements regarding air, water, wildlife and operations statewide are imperative to fulfilling the COGCC’s new mandate,” Sara Loflin, LOGIC’s executive director, said in a statement. “The dozens of oil and gas impacted communities LOGIC represents can’t continue to wait.”

Reporter Chase Woodruff covers the environment, the economy and other stories for Colorado Newsline.

Guide: Colorado colleges and universities issue COVID rules by Julia Fennell August 12, 2021
The pandemic has been hard. It's been harder on immigrants. by Faith Miller November 17, 2021
'We have the watch': Stories from inside NORAD on 9/11 by Emma Athena September 8, 2021