Do not waste energy hoping Sen. Cory Gardner will do the right thing.

Since news of Supreme Court Justice Ruth Bader Ginsburg’s death broke on Friday, all eyes in Colorado turned to the junior senator, since the Senate will be called upon to confirm a new justice.

Gardner posed as an independent decision-maker when he was first elected in 2014. “When my party’s wrong, I’ll say it,” he pledged in a campaign ad. Based on his subsequent performance, what he meant was, “When my party’s wrong, even if it aids a tyrant like Trump, furthers the destruction of constitutional order and results in repeated betrayals of public trust, I’ll keep my mouth shut.”

This wasn’t just election-year rhetoric. Gardner votes with Trump almost 90% of the time, according to FiveThirtyEight, even though he represents a state that in 2016 preferred Hillary Clinton by almost 5 points and where he is one of only two remaining Republicans in a statewide-elected office.

Gardner marched to Majority Leader Mitch McConnell’s drum when the Senate shirked its responsibility to check a criminal president and voted to acquit Trump after the House impeached him for indisputable abuse of office. He parrots Trump’s democracy-decimating claims of election fraud, as he did in 2018, from his position as chairman of the National Republican Senatorial Committee and without the slightest bit of evidence. Last year he voted in support of Trump’s brazen abuse of power when the president declared a state of emergency on the southern border and wrenched spending prerogatives away from Congress.

He serves a single purpose, which is determined in the Oval Office. Could Gardner suddenly decide to become a hero now? That would take a transformation on the order of a religious conversion. So when McConnell says, as he did on Friday, that Trump’s nominee to fill Ginsburg’s seat will get a Senate vote, there is only one choice for a person of Gardner’s faculties — fall in line.

But that doesn’t mean Coloradans shouldn’t voice their indignation and do everything possible to resist further perversion of the Supreme Court. Trump has already installed two justices on the court, one as the result of a stolen seat. The McConnell-led Senate blocked President Obama’s nomination of Merrick Garland to the court in March 2016. At the time, McConnell claimed the nomination came too close to a presidential election, a dishonest principle now known as the McConnell rule. Trump then put the Colorado ideologue Neil Gorsuch on the court. With Justice Anthony Kennedy’s retirement, Trump elevated extreme partisan Brett Kavanaugh to the court, even after Kavanuagh was credibly accused of sexual misconduct. That the hyperhypocritical McConnell would allow the unpopular and misogynist president a third Supreme Court pick to replace the adored feminist role model Ginsburg is just too much for too many.

“We cannot let Donald Trump — are you f***ing kidding me? — have three nominees on the U.S. Supreme Court” — those words, in breaking voice, were spoken into a microphone during a Friday evening vigil under the Martin Luther King Jr. statue at City Park in Denver, not by some hothead protester but by KC Becker, the speaker of the Colorado House. They reflected a sense — at the vigil, on social media, and on the street, at a time when the country already is dangerously divided over the president’s unprecedented behavior, partisan acrimony, police brutality and the very meaning of truth — that the political implications of Ginsburg’s death had catalyzed disquiet on the left with a new urgency.

“Put every bit of goddamn pressure we can on Cory Gardner to make sure he doesn’t side with Mitch McConnell and violate their own goddamn rule,” Becker exhorted the crowd of roughly 300.

Tay Anderson, a board director of Denver Public Schools and leader of police reform protests in Denver this summer, noted during the vigil in an interview with Newsline that 2020 had already been a trying year for the country.

“This is the last straw,” he said.

He started a GoFundMe page to raise money for Coloradans to demonstrate in Washington, D.C., against rushed attempts to fill the Supreme Court seat. The fundraiser reached its $10,000 goal in less than 24 hours.

This is just one avenue of action in Anderson’s vision of resistance. “It means protests, it means getting out in the streets, it means lobbying, it means standing up so we don’t have to endure this again,” he said.

Americans who recognize Trump as an existential threat to the United States already understood what’s at stake in the coming months. Ginsburg’s death only adds hazards to treacherous terrain. Gardner has been absent as his constituents searched for safe passage through the Trump years, and there can be no expectation he’ll come to their aid now. In a vacuum of leadership Coloradans are standing up for their own interests and making their voices heard.

Gardner won’t do the right thing. But the people will. 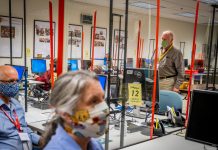 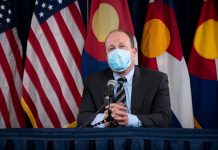