President Donald Trump and Democratic nominee Joe Biden in Tuesday night’s chaotic and messy presidential debate were each asked how they would deal with the nation’s institutional racism.

Trump directly addressed a far-right group, the Proud Boys, telling them to “stand back and stand by,” and failed to answer a question about why Americans should trust him to deal with issues of racial justice.

Biden recalled Trump’s “both sides” response to a deadly neo-Nazi march in Charlottesville, Va., in 2017.

The questions at the debate at Case Western Reserve University and Cleveland Clinic followed the police killings of George Floyd and Breonna Taylor this year that have ushered in a civil rights movement calling for police reform and justice for Black Americans killed by law enforcement.

While Biden in the debate focused on his message of unity and community based policing, Trump reinforced his position of “law and order” and the need to support law enforcement.

Biden said that a main reason that he decided to run in the 2020 presidential election was Trump’s reaction after Heather Heyer, who was protesting a “Unite the Right” white supremacy rally, was killed by a neo-Nazi in Charlotesville. The president later said that there “were very fine people on both sides.”

Debate moderator Chris Wallace of Fox News asked the president if he would condemn white supremacists and militia groups that incite violence.

“Are you willing tonight to condemn white supremacists and groups to say they need to stand down and not add to the violence and number of the cities as we saw in Kenosha and as we’ve seen in Portland?” Wallace asked Trump, referring to protests in Wisconsin and Oregon.

“I’m willing to do that,” Trump said, but then added that left groups were to blame for violence and unrest.

Wallace continued to ask the president if he would condemn white supremacist groups.

Proud Boys stand back and stand by   -President Donald Trump

“Proud Boys stand back and stand by,” Trump said, speaking to a far-right and neo-fascist group that only admits men and promotes violence.

The extremist organization in reaction quickly circulated that message on Twitter.

Biden said that “the only way we’re going to bring this country together is bringing everybody together — there’s nothing we cannot do.”

Trump did not answer Wallace’s initial question about why Americans should trust him to deal with race issues in the country. He instead brought up Biden’s support of a 1994 crime bill and stressed the need for police to contain protesters.

“You don’t want to say anything about law and order,” Trump said to Biden. “I’ll tell you what the people of this country want and demand, law and order, and you’re afraid to even say it.”

Biden responded that police “have to be held accountable” and that “violence in response is never appropriate.”

The next presidential debate is Oct. 15 in Miami. 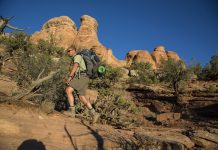 Denver allows inmates to vote in person for the first time