More than 3.6 million registered Colorado voters have begun receiving their 2020 ballots in the mail, and observers expect that a large majority of them will be returned and counted in November’s election. Four years ago, Colorado’s voter turnout rate of 72.1% was among the top five in the country, and its 65.2% rate in 2018’s midterms was even better, outranking every other state but Minnesota.

It’s a track record that many chalk up to Colorado’s vote-by-mail system, which has been in place since 2014 and is held up as a model for improving ballot access in other states — especially in 2020, with the coronavirus pandemic leading more Americans to cast their vote through the mail than ever before.

But it’s also highly likely that a sizable percentage of registered Colorado voters won’t cast their ballot at all this year, and still others aren’t registered despite being eligible. In all, even if Colorado beats its own turnout record next month, more than a million Colorado citizens over the age of 18 may fail to cast a ballot in an election that nearly everyone agrees will have dramatic ramifications for the future of the country.

In the last three federal elections, among all eligible Colorado voters, white non-Hispanic people were about 40% more likely to cast their ballot than Black, Latino, Asian-American and Indigenous people, Census estimates show. That’s roughly the same gap that existed in the three elections prior to Colorado’s adoption of mail-in balloting — and it’s worse than the average U.S. racial voter-turnout gap during the same period.

Colorado’s system still isn’t perfect, some progressive advocates and civic-participation groups say, and more can be done to make ballot access more equitable. But the continued disparities also reflect a deeper sense of disenfranchisement felt by people who have long been marginalized by the political system.

“There are definitely ways in which states can make it easier or harder for somebody to participate, and it does have an impact,” said Celeste Montoya, an associate professor of women and gender studies at the University of Colorado Boulder who studies voter participation and mobilization among disadvantaged groups. “But then even when you do remove some of those obstacles, there might be people who choose not to engage. One of the things we find with some ethnoracial groups is a low sense of trust in political institutions, or a sense that what they do isn’t going to make a difference.”

Census data on voting and registration are collected every two years by the agency’s Current Population Survey, a monthly poll comprising a sample of about 60,000 U.S. households. As weighted estimates based on survey responses, CPS turnout figures differ slightly from the official tallies by state elections officials, and state-level CPS data have a higher margin of error than the survey’s national estimates. But the data provides a snapshot of voter behavior across demographics throughout the last several decades of federal elections, including self-reported information on registration, voting methods and reasons why eligible voters didn’t vote.

Vote-by-mail in the spotlight

With November’s election to be held amid a deadly pandemic that is still ongoing across the country, tens of millions of Americans are expected to cast mail-in or absentee ballots in the coming weeks, many of them for the first time. It’s a trend that has put a spotlight on Colorado and other states where mail-in voting is common; more than 94% of Colorado ballots in the 2016 election were cast through the mail or via ballot drop-off boxes.

Republican officials, including President Donald Trump, have repeatedly sought to cast doubt on the integrity of 2020 election results by falsely claiming that vote-by-mail systems are susceptible to widespread fraud. Top Colorado Democrats like Secretary of State Jena Griswold have pushed back, and senior party officials say Colorado’s system proves that mail-in voting is safe, efficient and can help improve turnout across demographics and party lines.

“Colorado is a model,” Democratic National Committee Chair Tom Perez said in a September press call with Colorado Democratic officials. “It’s a model that I tout with regularity. I want to make sure that every state understands that if you want to have vote-by-mail, you should look at places like Colorado, Oregon, Washington state, because they have set a really, really good example.”

In research published in June in the Proceedings of the National Academy of Sciences, political scientists from Stanford University concluded that implementing vote-by-mail typically results in an overall turnout boost of about 2%, benefiting both parties equally.

“In our data, we confirm important conventional wisdom among election experts: (vote by mail) offers voters considerable convenience, increases turnout rates modestly, but has no discernible effect on party vote shares or the partisan share of the electorate,” the paper concludes.

In Colorado, there’s some evidence that adoption of universal mail-in voting — every registered voter in the state has automatically received a ballot in the mail since 2013 — has helped shrink certain long-standing disparities in voter participation.

In 2016 and 2018, CPS data show that the gap in turnout rates between higher-income and lower-income Coloradans narrowed to its closest margin in at least 20 years, bucking a consistent national trend.

Colorado has also become a national leader in youth voter turnout; 58.8% of Colorado citizens aged 18 to 34 voted in the 2016 election, according to census estimates, outranking every other state except for Minnesota and New Hampshire. Even so, that lags well behind the 74.4% turnout rate for Coloradans aged 35 or older — and advocates say that while mail-in ballots are a net positive overall, they can pose unique challenges for young voters.

“Even something as small as making sure people know how much postage to use, and where to go buy stamps, is a piece of the equation,” Carter added. “Vote by mail is amazing, but it still has its own challenges that we need to make sure we’re addressing.”

With hundreds of thousands of Coloradans facing greater economic hardship as a result of the pandemic, housing instability has also become a concern for advocates working to ensure equitable voting access. Griswold’s office has issued a “displaced voters” brochure outlining steps that people experiencing evictions, foreclosures or homelessness can take to make sure they’re registered and able to vote.

‘Show them that their vote matters’

Voting-rights groups say that more can still be done to improve access in Colorado, from further enhancing the number and locations of ballot drop-off boxes to adding paid postage to mail ballots (though officials say that most ballots that lack stamps are counted anyway). When Colorado lawmakers passed a package of voting reforms in 2019, Carter said, some advocates unsuccessfully pressed for a prohibition on voter service and polling centers within police stations, which they argued can depress turnout among people of color.

Still, the persistence of significant turnout gaps speaks to a larger sense of political alienation felt by many low-income people and people of color. Despite being some of the only people in the country with access to a convenient, universal vote-by-mail system, the explanations offered by non-voters in Colorado still closely resemble those reported by non-voters nationwide, according to census data.

Following the 2016 election, over 40% of Colorado non-voters reported that the reason they didn’t vote was either that they were “not interested, felt my vote wouldn’t make a difference” or “didn’t like candidates or campaign issues,” the CPS survey found. Another 24% said they were “too busy.”

“When a system doesn’t represent you, or fails you consistently again and again, there’s no way that doesn’t have an impact,” Carter said.

When a system doesn't represent you, or fails you consistently again and again, there's no way that doesn't have an impact.   -Michael Carter, of New Era Colorado Action Fund

Advocates and experts say that it’s incumbent upon political candidates and campaigns to continue closing turnout gaps by connecting with marginalized voters and building a sense of trust that elections can have a positive impact on their lives.

“Campaigns often, for whatever reason, don’t value the outreach to those demographics, or take them for granted,” Carter said. “If nobody’s reaching out to you, if nobody’s speaking to you about the issues that matter to you, then why would you feel like your voice matters?”

“There are groups that might need that extra effort to mobilize,” Montoya said. “To show them that their vote matters, that people who are running for office care what they think, and that the election will ultimately make a difference.” 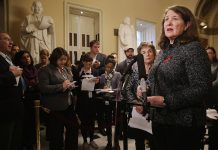