The impact of a public lands bill sponsored by Colorado Republican Sen. Cory Gardner is once again being questioned by the advocates who championed its passage, after an order issued by the Trump administration made major changes to a federal conservation program funded by the bill.

Among the changes made by the order, which was signed on Friday by Interior Secretary David Bernhardt, a Colorado native and longtime oil lobbyist, is a new requirement on land-acquisition deals financed by the Land and Water Conservation Fund, a 50-year-old program that assists state and local governments in purchasing lands for recreation or wildlife protection.

“A written expression of support by both the affected Governor and local county or county government-equivalent (e.g. parish, borough) is required for the acquisition of land, water, or an interest in land or water under the Federal LWCF program,” the order reads.

The move to grant governors and local county officials veto authority to all LWCF projects proposed within their states represents a major departure for the program, and a victory for Republicans and conservative interest groups who have opposed government efforts to acquire new public lands.

Bernhardt’s order drew praise from the National Cattleman’s Beef Association, which praised the administration for “reining in (a) land grab law.”

“States and local stakeholders know best what their communities need and should be directly involved in these decisions,” Kaitlynn Glover, the NCBA’s executive director of natural resources, said in a statement. “Ranchers appreciate Secretary Bernhardt’s work to make certain LWCF cannot be used as a tool for rampant, unchecked acquisitions.”

Earlier this year, conservation advocates cheered the passage of Gardner’s Great American Outdoors Act, which secured full, mandatory funding for the LWCF, which had previously faced chronic shortfalls as revenues intended for the program were diverted elsewhere by lawmakers.

But concerns have mounted over the Trump administration’s implementation of the GAOA since the Interior Department missed a Nov. 2 deadline to submit a list of projects to be funded through the LWCF in the next fiscal year. Officials eventually submitted the list to Congress a week late, but conservation groups said it missed the mark in its composition and lack of detail.

“The administration has utterly blown its shot at implementing this historic conservation and recreation law, whiffing on three separate chances to get this right,” Drew McConville, senior managing director of government relations at The Wilderness Society, said in a statement.

Neither Gardner nor the Interior Department immediately responded to requests for comment.

Conservation advocates and some members of Congress have expressed hope that lawmakers will “honor the intent” of the GAOA by funding a full slate of LWCF proposals in a lame-duck appropriations bill. But Bernhardt’s order appeared to reassert his department’s authority over the process, instructing federal agencies that their expenditures on LWCF projects should be “consistent with the account, program, and project allocations established by the President.”

“This is yet another example of how this administration has tried to thwart conservation at every turn,” Tracy Stone-Manning, the NWF’s associate vice president for public lands, said in a statement. “We look forward to working with a new Secretary of the Interior to fix this order so the conservation program can reach its full potential, as intended by the overwhelming bipartisan majority in Congress which voted for its permanent funding just a few months ago.”

Editor’s Note: This story has been updated to include a statement from the National Cattlemen’s Beef Association. 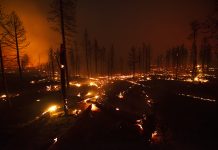