Coloradans may pride themselves on their eco-consciousness, but there’s at least one area of environmental policy where they remain national laggards.

“We have a lot of room to grow when it comes to recycling,” said Colorado First Gentleman Marlon Reis, who joined Gov. Jared Polis at a virtual event on Nov. 16 marking Colorado Recycles Week. “Incredibly enough, for being such a climate-conscious state, we trail far behind the national average (rate) of 36% for recycling and composting.”

In fact, Coloradans only recycle or compost about half of the waste that the average American does — and things are getting worse. Colorado’s statewide diversion rate for municipal solid waste, or MSW, dropped to 15.9% last year, down from 17.2% in 2018, according to a new report from Boulder-based recycling nonprofit Eco-Cycle and the Colorado Public Interest Research Group.

Overall, Colorado residents dumped more than 6.1 million tons of material into landfills in 2019, while recycling or composting just 1.1 million tons. That amounts to an average of about one pound of recycled material per person per day — by comparison, residents in Oregon and Washington recycled three times as much on average.

“While this is certainly disappointing, it is also not terribly surprising,” reads the report, which cites high recycling costs and inadequate infrastructure as the primary factors in Colorado’s lack of progress. “This strongly suggests that greater investments and systemic policy changes are needed to drive Colorado toward a circular economy.”

Colorado has struggled for years to improve its dismal recycling rates, which are driven in large part by its spacious landfills and low waste disposal fees. With little economic incentive for municipalities and businesses to do anything but landfill their waste, “end markets” for recyclable material have been slow to develop.

Earlier this year, state lawmakers passed a bill aimed at boosting end-market development, directing the Colorado Department of Health and Environment to undertake a variety of efforts to attract recycling businesses to the state. Another new state program, the Front Range Waste Diversion Fund, was launched earlier this year to provide grants to local governments and organizations working to improve recycling and composting rates.

“We have a lot of work to do to move Colorado forward,” Eco-Cycle executive director Suzanne Jones said at Monday’s Colorado Recycles Week event. “Recycling is something we need to do everywhere — at home, at work, in government and in our schools.”

Recycling advocates want to see the state continue to invest in end markets and do more to combat plastic pollution. They also continue to urge local governments to offer curbside recycling pickup automatically to all residents, and expanding such programs to include more businesses and apartment buildings, which often lack adequate or convenient recycling services.

With recycling and composting on the decline, the stakes for Colorado’s clean air and water could be high.

“Residents in multifamily properties such as apartments and condos have had historically limited access to recycling and composting services, leaving potentially hundreds of thousands of Coloradans, many of whom are renters, without convenient on-site recycling programs,” the report says.

With recycling and composting on the decline, the stakes for Colorado’s clean air and water could be high. Among the many environmental costs of excessive waste are the greenhouse gases emitted by decomposing organic material and waste-disposal infrastructure.

The waste-management sector is projected to be responsible for nearly 5 million tons of carbon-dioxide-equivalent emissions in 2020, according to state estimates. That’s only a fraction of the 125 million tons emitted statewide — but with officials targeting an ambitious series of decarbonization goals, including a 50% cut by 2030, every ton of reduced emissions helps.

“This year, there’s no question, we’ve seen firsthand the impacts of climate change,” Polis said Monday. “That has only reinforced the sense of urgency we have and the need for Colorado to lead on climate issues. And recycling and composting are climate issues.”

In 2017, CDPHE’s Solid and Hazardous Waste Commission enacted a series of “realistic waste reduction goals” of its own, in response to lawmakers and environmental advocates who wanted the state to step up its efforts.

Barring a miracle, Colorado appears likely to miss the first target — a 28% statewide diversion rate by the end of next year — by a mile. Polis, however, said that he believes that state officials and local governments can work together to turn things around, and curb Colorado’s emissions in the process. 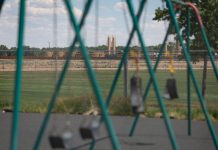