After a years-long wait, the Colorado Outdoor Recreation and Economy Act finally got its first hearing in the U.S. Senate on Wednesday, but Republican lawmakers and top public lands officials in President Donald Trump’s administration made clear that the conservation package isn’t a top priority.

In a hearing of the Public Lands, Forests and Mining Subcommittee of the Senate Committee on Energy and Natural Resources, Sen. Mike Lee, a Republican from Utah and the subcommittee’s chair, asked a panel of witnesses only a few brief questions about the CORE Act, focusing on whether it aligns with the Trump administration’s goal of “maintaining American energy dominance.”

“This bill does not support the department’s goal of maintaining energy dominance and relying less on foreign countries,” answered Michael Nedd, deputy director of operations for the Bureau of Land Management.

Chris French, deputy chief of the national forest system for the U.S. Forest Service, similarly told Lee that while “consensus” exists on some parts of the CORE Act, the bill doesn’t match the “overall intent of the administration.”

Sponsored by Democratic Sen. Michael Bennet and Rep. Joe Neguse of Lafayette, the CORE Act is a package of several Colorado public-lands proposals, many of which have been championed for years by local governments and conservation groups. The Democratic-controlled House of Representatives has already passed the bill twice in the 116th Congress.

The legislation would protect more than 200,000 acres of BLM land in the Thompson Divide area from future oil and gas development, add roughly 73,000 acres to new and existing wilderness areas across the state and establish a first-of-its-kind “National Historic Landscape” designation around the site of Camp Hale, a World War II training facility located north of Leadville.

Colorado Republican Sen. Cory Gardner, who sits on the Public Lands, Forests and Mining Subcommittee, was not present at Wednesday’s hearing. While Gardner, who earlier this month lost his bid for reelection to former Gov. John Hickenlooper, has declined to endorse the CORE Act, he has also said that he won’t stand in the way of the bill, telling the Gunnison Country Times in July that “they could pass it and I’m not objecting to it.”

A spokesperson for Gardner didn’t respond to a request for comment.

Sen. Martin Heinrich, a Democrat from New Mexico, said during the hearing that Colorado’s Bennet had asked to testify at Wednesday’s hearing, but was “denied that opportunity.”

“I think it’s important to state that S. 241, the CORE Act, just the breadth of local support for that legislation … the number of county commissions and other leaders who have really embraced this legislation is impressive,” Heinrich said. “I think it was unfortunate that (Bennet) was not able to be here today to give his testimony in person.”

In written testimony to the committee, Bennet said the CORE Act was the product of land-management decisions that are “locally developed and decades in the making.”

“We are here because of the hard work of so many Coloradans, over the last decade, to hammer out compromise and find the best way forward,” Bennet wrote. “To identify shared values and, despite disagreements, to work together to find solutions. To broker compromises, adjusting boundaries, and modifying designations, until each of the four proposals reflected local interests.”

With time running out on a lame-duck session of Congress, the CORE Act on its own may face an uphill climb in the GOP-controlled Senate. But supporters have pinned their hopes for passage on the 2021 National Defense Authorization Act, after the CORE Act was added as an amendment to House Democrats’ version of the annual military-appropriations bill.

In order to become law, the CORE Act amendment will have to survive a contentious conference committee process as Democrats and Republicans hash out the differences between the House and Senate NDAAs. Lawmakers began that process on Wednesday, perhaps offering the last, best hope for the CORE Act’s passage before the current Congress adjourns on Jan. 2.

“The CORE Act would invest in the very best of Colorado, by preserving our treasured public lands and strengthening our economy through major investments in outdoor recreation.” Neguse said in a statement. “I’m proud of our work to ensure its passage in the House twice, and welcome this action by the Senate to move it forward in the legislative process.” 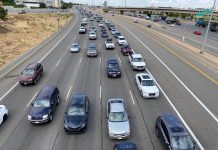