Local officials from the Western Slope joined members of Colorado’s congressional delegation on Tuesday to launch their latest effort to enact a major package of public lands legislation, amid renewed hopes for its passage in a Democratic-controlled Senate.

Democrats Rep. Joe Neguse of Lafayette and Sens. Michael Bennet and John Hickenlooper announced that they will reintroduce the Colorado Outdoor Recreation Economy Act in the 117th Congress, after the bill, which has faced opposition from Republicans, failed to become law last year.

“If we’re able to pass the CORE Act, it will be one of the most significant public lands bills for Colorado in over a quarter of a century,” Bennet said in a virtual press conference on the bill’s reintroduction. “The good news is that today, we’re in a much better place to pass it than we were two years ago.”

More than a decade in the making, the CORE Act would establish a range of new protections for more than 400,000 acres of federally-owned land across Colorado. It would withdraw more than 200,000 acres of land in the Thompson Divide area from future oil and gas development, add roughly 73,000 acres to new and existing wilderness areas and establish a first-of-its-kind “National Historic Landscape” designation around the site of Camp Hale, a World War II training facility north of Leadville.

The Democratic-controlled House of Representatives passed the CORE Act twice in the 116th Congress, but the legislation stalled in the Senate amid a lack of support from former GOP Sen. Cory Gardner and opposition from the Trump administration, which said the bill didn’t align with its “energy dominance” agenda. A last-ditch effort by House Democrats to pass the bill as part of a defense-appropriations bill in December proved unsuccessful.

“We came pretty darn close to getting it into law, but unfortunately weren’t able to cross that final line to the president’s desk,” Neguse said. “I have no doubt that this is the year that we make the CORE ACT reality.”

Rep. Lauren Boebert, the Republican firebrand newly elected to represents Colorado’s 3rd Congressional District, where much of the land affected by the CORE Act is located, denounced the legislation on the campaign trail in 2020, calling it a “land grab by Denver’s liberals.” Boebert’s GOP predecessor, Rep. Scott Tipton, also opposed the bill, voicing concerns about a lack of local buy-in.

But Bennet dismissed those criticisms, saying that the bill is the product of years of hard-won compromises and “was written in Colorado, not Washington.” Hilary Cooper, a San Miguel County Commissioner, agreed.

“We have considered every single reasonable comment, criticism and concern, and adapted that into the bill,” Cooper said. “These are treasured places, and are also a much-needed boost to our local economies, especially during the pandemic.”

Hickenlooper, who repeatedly criticized Gardner’s lack of support for the CORE Act in a successful campaign to unseat the Yuma Republican last year, also announced on Tuesday that he had been appointed to the Senate Committee on Energy and Natural Resources, where he’ll play a key role in crafting public-lands legislation.

“I’m pretty optimistic,” said Hickenlooper of the bill’s chances. “It’s a beautiful bill, I feel honored to be a part of it. And I will lie awake at night if we can’t get this done pretty quickly.” 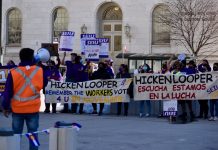 Need for proposed supportive housing project not contested, only its location