Around 500 Coloradans who are 70 and older were signed up to get a shot in the arm at St. Cajetan Catholic Church in west Denver each day from Friday through Sunday.

The drive-thru COVID-19 vaccine clinic — organized in part by Democratic state Reps. Serena Gonzales-Gutierrez and Julie Gonzales of Denver, plus Denver City Council members Amanda Sandoval and Jamie Torres — was scheduled from Friday to Sunday and will wrap up a day before the state expands vaccinations to adults 65 and older, teachers and child care workers. All vaccine slots were booked ahead of time, in “a matter of days,” according to Conor Cahill, a spokesperson for Gov. Jared Polis.

“The community would like to do more clinics in the future and possibly at another location in the neighborhood,” Cahill said in an email.

Clinics like this one are part of the state’s efforts toward improving access to the vaccine for marginalized communities.

Black, Latino and Asian people are less likely to have gotten the COVID-19 vaccine than white people in the state, according to data from the Colorado Department of Public Health and Environment.

Hispanic people comprise around 22% of Colorado’s population, according to the American Community Survey, but only 5% of Coloradans who were vaccinated as of Feb. 4.

Black people make up 3.9% of the state’s population but only 2% of those vaccinated, and Asian people represent 3.1% of all Coloradans and 1.8% of the vaccinated population.

Meanwhile, white people are overrepresented among Colorado’s vaccinated. White, non-Hispanic people comprised 68% of Coloradans and 73% of those vaccinated as of Feb. 4.

State officials believe bringing vaccine clinics into neighborhoods and churches could help reduce those disparities. St. Cajetan, which has a large Spanish-speaking congregation, is one example.

Drive-thru clinics like this weekend’s at St. Cajetan are key to ensuring people of color can access vaccines, thus “making a dent in the equity gap,” said Polis, who stopped by the clinic Saturday morning.

“We’re working with community leaders, elected officials from minority communities, church leaders and others to really meet people where they are,” the governor said in an interview.

Parishioner Maria Mendoza, 70, learned about the opportunity to get the vaccine through her church.

While waiting in her car for 15 minutes after getting the shot — part of the standard vaccination protocol in case the patient has an allergic reaction — she said she was feeling fine.

“It’s good for my health,” Mendoza said in Spanish.

Others at the clinic with their family members expressed frustration with how long it took to get a vaccine appointment.

Matt Riebe, 56, said his wife saw a post on Facebook about the clinic and helped their older relatives, who live in the Denver area, get signed up. He’s concerned some seniors might not hear about upcoming clinics because they aren’t on social media.

“To advertise for most people on Facebook, in the age range that they’re looking for, is really kind of weird to me,” he said. “But now that we found out about it … my mom, she let a bunch of her friends know and they called, they’re getting scheduled. They’re coming in later today, too, and they’ve all been on four or five lists, so this is awesome.”

Matt Riebe drove Charles Riebe, 86, to the clinic for his first shot. The older Riebe said he would be happy to “eat hamburgers, drink beer and chase the girls” after getting both doses of the vaccine.

They both were happy with the drive-thru clinic. “This is seamless, easy, smooth, well-organized,” Matt Riebe said.

Starting on Feb. 8, Colorado teachers and child care workers, along with people 65 and older, will also become eligible to sign up for vaccination appointments. Providers will continue to vaccinate people 70 and older, who first became eligible in early January.

But Nan Kozdruy was on four different waiting lists before she found out about the clinic at St. Cajetan, according to her daughter, Cheryl Kobayashi.

“Finally it’s starting to feel like someone’s really doing something,” Kobayashi said of the vaccination process in Colorado. “But I think like most people in Denver, you put yourself on as many lists as you possibly can, hoping someone will call you.”

Kozdruy said she was “very grateful” to finally be getting vaccinated.

“Going to be 91 this month, so I figured I’d better get this done,” Kozdruy said. 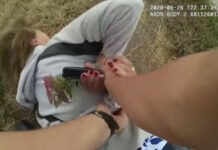 Here’s how Colorado’s Democratic leaders want to spend the state’s $3.8...