From the moment Eva Ruiz opens her eyes in the morning until she lays her head down at night, she’s worrying about her son, Joel Ramirez.

“There are times where he calls me and tells me, ‘Mom, I don’t know how much more I can take of this,'” said Ruiz, whose 36-year-old son is serving a 10-year sentence at the Sterling Correctional Facility — Colorado’s largest state prison and the site of one of the biggest coronavirus outbreaks in the state.

As of Feb. 3, 1,517 inmates — over 87% of the prison’s population — and 243 staff members had contracted COVID-19 at the facility, and 10 inmates have died, according to state outbreak data. The prison has been on Phase III modified operations since April 15, meaning inmates have been isolated in their cells for 23 hours a day, with little means to contact their families or occupy their minds.

Coronavirus outbreaks at Colorado prisons, jails, and other correctional and detention facilities account for 1 in every 24 COVID-19 cases in the state, and 15 of the 20 largest outbreaks, according to a recent analysis by the Colorado Health Institute, which encouraged the state to prioritize inmates for the vaccine. More than 16,000 people have contracted the virus in Colorado correctional facilities, and 32 have died, according to the report.

Most educational and community programs have screeched to a halt in an attempt to limit the number of people going in and out of correctional facilities. Criminal justice advocates, behavioral health specialists and families worry the necessary lockdowns are fueling an already existing mental health crisis inside the state’s correctional facilities.

“It’s already hard for family members to be in contact with their loved ones who are incarcerated in general,” said Apryl Alexander, a clinical and forensic psychologist and trauma researcher at the University of Denver. “Now that you add these COVID-19 precautions that limit visitation, it also limits community programs from going inside and offering services like they normally do. We’re seeing a lot more isolation and we know that it is wearing on everyone’s mental health.”

“We’re seeing a lot more isolation and we know that it is wearing on everyone’s mental health.” — Apryl Alexander, a clinical and forensic psychologist and trauma researcher at the University of Denver.

Alexander coauthored a paper in June in the Journal of Humanistic Psychology, titled, “Sick and Shut In: Incarceration During a Public Health Crisis.”

“There’s a lot of literature discussing the physical and mental health consequences of solitary confinement,” Alexander said. “Isolation can lead to depression, anxiety, and can cause some cognitive difficulties which intertwine with the physical constraints. Most suicides that happen in correctional settings happen when a person is in solitary confinement.”

Annie Skinner, a spokeswoman for the DOC, said the department has not seen an increase in mental health needs during the pandemic. While prisons are on lockdown, she said that clinicians monitor mental health needs through cell-side visits and provide homework for inmates to complete.

“After hours mental health on-call crisis responses have utilized tele-health more to mitigate exposure risks between housing units and facilities,” she said in a written statement.

“During the pandemic, behavioral health treatment programs such as Drug and Alcohol Therapeutic Communities and the Sex Offender Treatment Management Program (SOTMP) may be modified in order to adhere to public health needs,” Skinner said.

She added that some education programs have continued through the pandemic, either virtually or via written correspondence, but she did not respond to multiple requests regarding what specific programs are still being offered and at what facilities.

Ruiz’s contact with her son dropped off when the prison went into lockdown in April. Weeks later, he told her over the phone he wasn’t receiving her letters or emails and that the conditions in the prison had worsened significantly.

“He was calling and saying it was really bad at the facility. It was not being cleaned,” Ruiz said. “He said that everything that they said they were doing in there, saying that it was clean and that they were doing the proper care, he said, ‘Mom, that’s all a lie.'”

Ruiz said her son watched in horror as correctional officers removed someone who had died in their cell after exhibiting COVID-19 symptoms. “He said, ‘This poor man, he needed help and they just left him there, mom.’ Nobody came and they wouldn’t check up on them or anything,” Ruiz said, recalling their conversation.

When she does get to speak to her son on the phone, she tries to talk about positive things.

“We just talk about things that we’ve done before, just to get his mind off of all of this,” she said. “Or I’ll tell him some jokes and he laughs about it. I tell him how the family is doing and tell him they asked about him and they send their love. But it’s just really hard.”

She worries that if something were to happen to him, she wouldn’t be contacted. After her son had surgery in November to help relieve his asthma symptoms after waiting almost a year to see a doctor, she called any number she could find and ping ponged back and forth between people.

“If they can’t communicate with me now, who’s to say if something happens, they’re not going to communicate, or let me know what’s happening or if anything has happened to him,” Ruiz said.

After the Summit County jail went on two-week lockdown both in late October and December due to coronavirus outbreaks, Lt. Sylvia Simms said there was a noticeable spike in the number of people requesting mental health services.

“Nobody was allowed in or out, including therapists and our case manager. And inmates had to be locked down 23 hours a day,” Simms said, who has worked for the Summit County Sheriff’s Office for 15 years and is now the program coordinator for the facility’s Jail Based Behavioral Health Services, a state-funded program managed by the Office of Behavioral Health.

Some jails across the state have been able to offer tele-behavioral health services throughout the pandemic in order to limit the number of people in the jail at any given time.

“After these kinds of lockdowns, more inmates are ready to go and talk,” said Simms, whose team consists of a therapist, a psychiatrist and a case manager. “(There’s) a lot of anxiety, a lot of bad thoughts, not necessarily suicidal, but just dark thoughts.”

“After these kinds of lockdowns, more inmates are ready to go and talk. (There’s) a lot of anxiety, a lot of bad thoughts, not necessarily suicidal, but just dark thoughts.” — Lt. Sylvia Simms, who has worked for the Summit County Sheriff’s Office for 15 years.

Simms said that due to court backlogs and delays in Department of Corrections taking new people into the prison system, inmates are being held longer in the jail, which is also contributing to the strain on their mental health. She said before the pandemic, people usually waited a week after being sentenced to be transferred to a state prison. Now, it’s a month or more.

“Being stuck in a county jail, it gives them that feeling like, ‘I’m not moving anywhere. I’m not going anywhere. I want to be done with this case. And I’m still here,’” she said. “It’s very challenging.”

Simms said with a lot of other programs halted due to the pandemic — including church services and the jail’s GED program — more people are requesting therapy or substance abuse treatment because it’s one of the only programs inmates have access to.

Jenny Wood, director of criminal justice services at Colorado’s Office of Behavioral Health, said the state doesn’t have enough data yet to definitively say that mental health in jails is worsening due to the pandemic. But she said increases in the number of calls to the state’s crisis hotline is likely an indicator.

Since the pandemic started, the state has seen a 36% increase in the number of calls to its crisis line. “That just shows the representation statewide of how this pandemic has impacted people that are actually reaching out for help,” Wood said.

Joel Miller, the state’s Jail Based Behavioral Health Services manager, said the decision jails across the state have made to halt community and educational programs during the pandemic has been a difficult one.

“They really had to look at what are essential services versus nonessential services and ask themselves, ‘Well is the greater good to not have 15 people coming in on Tuesday nights to offer these things that are risky to manage?’” Miller said. “Just looking at the numbers of (calls to) the state’s crisis line, I’m sure that’s being felt in the jails, too, because that outlet is gone.”

Inmates have little to occupy their minds

Maire Callan, a volunteer coordinator with the Alternatives to Violence Project Colorado — an organization that typically hosts one to two workshops a month for inmates in prison — said that the pandemic has likely only increased the sense of isolation that inmates already feel while incarcerated.

AVP’s workshops, which focus on empowerment and typically have 150 to 200 participants, came to an abrupt halt when the pandemic reached the state’s prisons. Callan said program coordinators tried to convince the DOC to allow them to continue offering programs partially online, but they were told that the prisons did not have enough staff during modified operations to make a hybrid model work.

Callan, who has been a group facilitator for over 10 years, said AVP’s workshops give people who are incarcerated a sense of purpose and an avenue to heal and grow.

“One of the things I realized very quickly with the prison paradigm is that people feel discarded,” Callan said. “They feel disconnected from society. And of course, COVID has only exacerbated that tremendously.”

To try to still connect with inmates during the pandemic, AVP staff have written newsletters to be distributed within the prisons they partner with. The letters offer inspirational quotes and words of encouragement for inmates.

“It’s the best we can do right now,” Callan said. “We really just wanted to say, ‘We haven’t forgotten you, and we think about you all the time. And we will see you soon.” 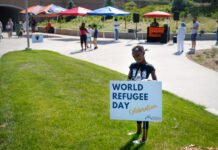 Settled into new homes, refugees in US say they are working for a better life for all

Biden promises ‘no national shutdown’ despite surge in COVID-19