Colorado’s COVID-19 dial system of restrictions has undergone constant evolutions since it was first introduced by state officials last September, but today marks its biggest change yet — from now on, the dial is merely advisory, with the final say on most public health restrictions left up to local governments.

“With more and more people becoming vaccinated, including our most vulnerable, the state is at a point where we feel like now is a good time to start devolving disease transmission control to the local level,” Jill Hunsaker Ryan, executive director of the Colorado Department of Public Health and Environment, said in an April 13 press conference. “This will empower counties to do what is necessary to protect their communities.”

The dial system assigns a color-coded status level to each Colorado county based on key COVID-19 metrics, like testing positivity and current hospitalizations, outlining a rising scale of public health restrictions on workplaces, schools and social gatherings to correspond with higher rates of transmission.

The dial mandate was frequently the subject of controversy, both from Republican-controlled counties whose leaders chafed at public health measures aimed at slowing the spread of the virus, and from local public health officials who were critical of inconsistencies in how the state applied its rules.

As a deadly third wave of infections hit Colorado in November 2020, many counties across the state experienced rates of COVID-19 transmission corresponding to Level Red, which under the original dial system would have triggered stay-at-home orders. But state officials delayed reclassifying counties to Level Red and ultimately amended the dial system to add a new “Level Purple,” preventing any new stay-at-home orders from being issued. The dial underwent several additional rounds of major changes, with the latest “Dial 3.0” framework taking effect just over three weeks ago.

Gov. Jared Polis has also begun to loosen Colorado’s statewide mask mandate, which has been in place since last July. Under the latest 30-day extension of the mask order, issued April 2, counties at Level Green on the state’s dial are exempt from mask rules, with the exception of schools, state government buildings and certain other indoor settings. Counties currently at Level Green include many small rural counties on the Eastern Plains and southwest Colorado.

Polis’ continued loosening of restrictions comes despite rising concern about a fourth wave of coronavirus infections in Colorado and across the country, driven in part by more transmissible variants of the virus.

Defending his decision to restore local control over public health restrictions in an April 9 press conference, Polis said, “I have full faith in our city councils, our mayors, our county commissioners, our local public health authorities, to know the best way to message the importance of mask-wearing and avoiding social gatherings.”

Four days later, however, commissioners in conservative Douglas County voted unanimously to opt out of further public health orders issued by the Tri-County Health Department, the regional health authority that also serves Adams and Arapahoe counties. Commissioner Abe Laydon, a Republican, expressed his hope “for Douglas County to be first county in the state to say that this pandemic is over.”

Several other counties in the Denver metro area, including Denver, Jefferson and Boulder counties, are joining with Tri-County to collaborate on a regional approach to looser restrictions for the next several months. Most counties in the region will follow the state’s Level Blue restrictions until May 16. Appearing beside Ryan and Polis at this week’s press conference, Tri-County executive director Dr. John Douglas urged residents to continue wearing masks, avoiding social gatherings and getting vaccinated as soon as possible. 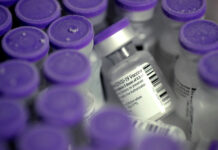 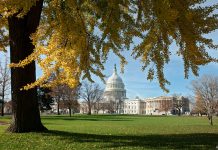 More than $350B in federal recovery cash starts rolling out to states, cities, counties

Colorado restaurants on a ‘rollercoaster ride’ of changing COVID restrictions

States just one step away from COVID-19 vaccine rollout after federal...