When Rick Williams started researching the history of his great-great grandfather in summer 2018, he stumbled upon a horrifying fact. Then he set out to change it.

Rick Williams, a member of the Oglala Lakota and Northern Cheyenne tribes, poses for a portrait outside the Colorado Capitol on Aug. 17, 2021. (Moe Clark/Colorado Newsline)

When tribal elder Rick Williams, a member of the Oglala Lakota and Northern Cheyenne Tribes, started researching the history of his great-great grandfather, White Horse, in the summer of 2018, he stumbled upon a horrifying fact.

He discovered that two proclamations signed 157 years ago that explicitly targeted Native Americans and incited the mass murder of at least 230 Native people during the 1864 Sand Creek Massacre had never been formally rescinded.

“Because we wouldn’t give up our land, they decided they were going to kill us however they needed to do it,” said Williams, as he stood in the shadow of the Colorado Capitol on Tuesday.

Gov. Jared Polis on Tuesday, alongside Tribal leaders and state lawmakers, formally rescinded the two proclamations issued by former territorial Gov. John Evans during a public gathering at the Capitol.

“Territorial Gov. Evans’ horrific proclamation directing the non-native residents of Colorado to seek out and kill Indians is one of the many symbols from the disturbing chapter in our state’s history,” said Lt. Gov. Dianne Primavera, who also leads the Colorado Commission of Indian Affairs, during the public announcement. “The effects of that trauma have trickled down for generations.” 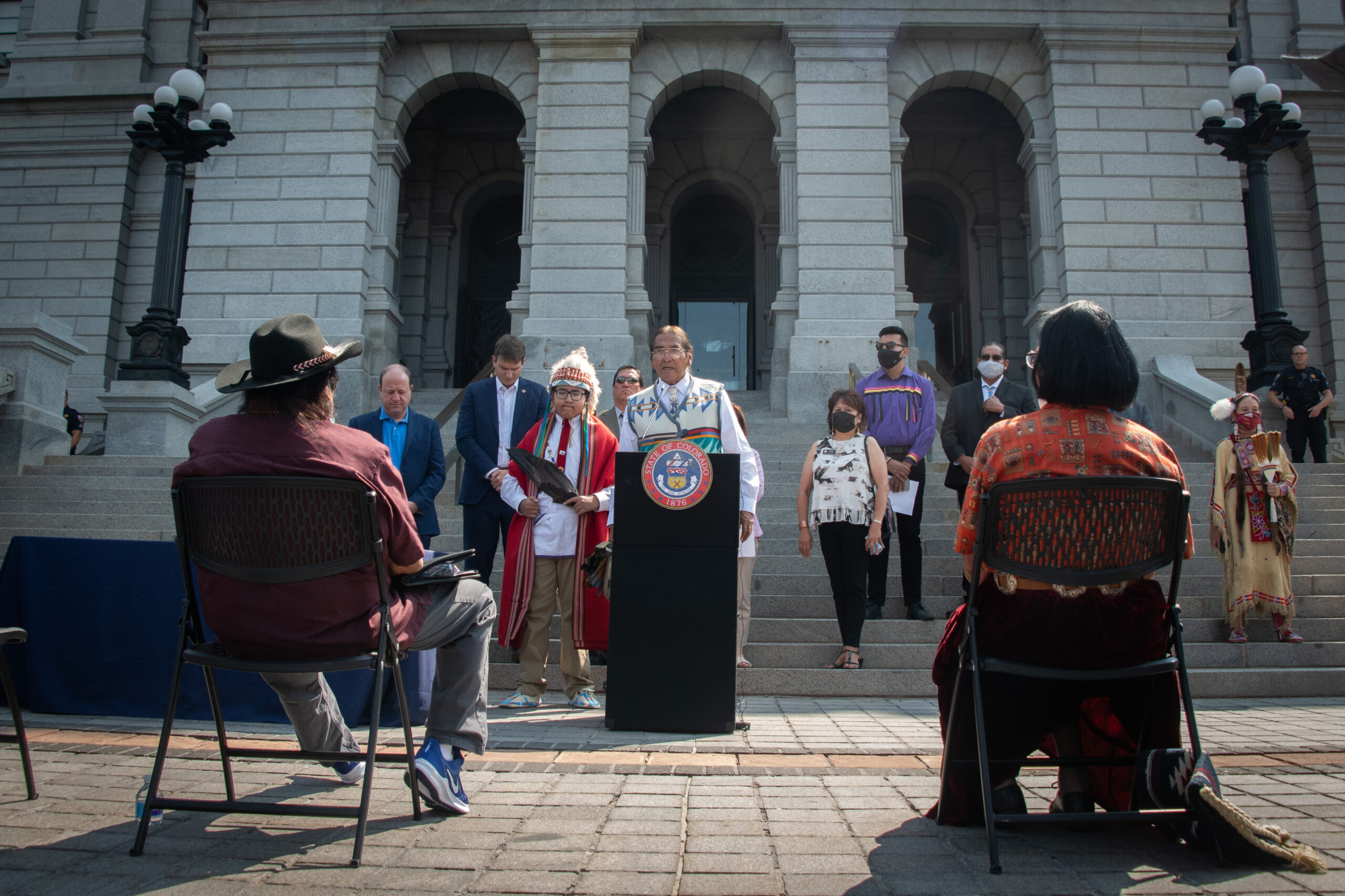 Various tribal leaders spoke at the gathering about the resilience of their people and how to heal from the harms of the past and build a better future. Reggie Wassana, governor of the Cheyenne and Arapaho Tribes, told Polis the “Tribes are going to come back to Colorado.”

Melvin Baker, chairman of the Southern Ute Indian Tribe in southwest Colorado, thanked the governor for helping to pass recent laws that ban the use of Indian mascots in schools and provide free state college tuition for Native students.

“In my nine years, I’ve never seen any bills come through like this,” he said. “I think other states can learn from that.”

The proclamations that led to mass murder

The first proclamation issued by Evans in 1864 directed “friendly Indians” to gather at specific locations and threatened violence against those who did not comply. The second authorized citizens to kill and take the property of Native Americans who were deemed “hostile.”

“It’s great that the proclamation, or the law, was rescinded,” said Donald M. Ragona, a member of the Matinecock Tribe who works with the Native American Rights Fund. “It’s a shame that it took this long to do it, but it’s a step.”

At dawn on Nov. 29, 1864, approximately 675 U.S. soldiers descended on a camp of between 700-750 Cheyenne and Arapaho people who had established a camp at Sand Creek — located in present day Kiowa County — on a reservation established for them under the 1861 Treaty of Fort Wise, according to the Sand Creek Massacre Foundation, a nonprofit in partnership with the National Park Service.

The soldiers continued their approach even after Cheyenne Chief Black Kettle raised an American flag and a small white flag signaling the tribe’s peace with the United States. Two days after the slaughter, the soldiers rode “in triumph” through the streets of Denver, displaying scalps and other body parts, according to the foundation.

“After that, we didn’t exist here anymore,” said Williams.“Why are there no Indian reservations on the Front Range of Colorado or around the Eastern Plains? It’s because one word: genocide.”

“Why are there no Indian reservations on the Front Range of Colorado or around the Eastern Plains? It's because one word: genocide.”

Three federal investigations were initiated in the wake of the massacre, two congressional and one military, all of which denounced the actions, according to the executive order that officially rescinded the proclamations. But Evans never took responsibility for his role in the murders and resigned from his post in 1865.

“We wouldn’t have known without him”

The same summer Williams was researching his great-great grandfather, state Rep. Adrienne Benavidez, a Denver Democrat, happened to attend a lecture by Williams at the Denver Indian Center. The talk was about the migration of Native tribes throughout Colorado, during which Williams mentioned the two proclamations that he believed were never formally rescinded.

“I was shocked,” Benavidez said. “I had never heard of it, and most people there hadn’t either.”

“In the 10 years after that, I knew a lot of Indians left the state after Sand Creek,” she added. “But I just thought they were worried because of that, of being killed. But I didn’t realize there was this, effectively a law, that said it was open season on Indians.”

Benavidez brought the issue to Megan Waples, a senior attorney with the Office of Legislative Legal Services at the Capitol, who confirmed that the two proclamations were still on the books but that they were superseded by state and federal laws established when Colorado became a state in 1876.

Benavidez brought that information to Primavera and asked that the governor formally rescind the proclamations.

“That was sometime in 2019, because (Waples) had to do the research and we had a session going on. I can’t remember why it didn’t go forward,” Benavidez said. “But it had never gone from her office to the governor’s office, to my knowledge.”

After that, Williams continued contacting the governor’s office.

“A year and a half ago, I started approaching the governor, to try to get him to rescind it, and I never got a response,” Williams said. “I probably sent 15 emails and phone calls and nobody cared.”

Conor Cahill, a spokesperson with the governor’s office, said on Wednesday that Williams met with the Colorado Commission of Indian Affairs and staff last year, and that it was decided that more research needed to be done before action could be taken on the proclamations. He did not state when the issue came to the governor’s attention, but applauded Williams for his leadership on the issue.

In the 10 years after that, I knew a lot of Indians left the state after Sand Creek,” she added. “But I just thought they were worried because of that, of being killed. But I didn’t realize there was this, effectively a law, that said it was open season on Indians.

Williams said he confronted Polis during a bill signing ceremony in late June about why he hadn’t taken action on the issue.

“And (Polis) said, ‘I don’t know anything about it,’” Williams recalled. “Clearly, nobody, none of his aides, were communicating with him about the issue and what was going on.”

“I think the lesson is that sometimes our political leaders don’t get a message about what they should be doing,” Williams added. “This should have been a no-brainer. It could have been done without any fanfare whatsoever.”

“It had to be done, because it was putting people’s lives in jeopardy, whether they think it or not,” he said. “Our Indian people were psychologically impacted by this. So, this is just the beginning. We’re going to start healing now, and as part of this healing process, we’re going to try to work getting our land back.”

He said he would like to secure sacred locations in the state, such as the site of the Battle of Summit Springs, which took place near present day Sterling. The battle occurred in 1869 between the U.S. army and the Cheyenne Dog Soldiers, led by Chief Tall Bull, who was killed in the fight.

“We know of many, many other sacred sites that need to be reclaimed and taken care of. So, we have a big job ahead of us,” Williams said.

Benavidez said although Williams wasn’t recognized at the ceremony where Polis formally rescinded the proclamations, she credits him for bringing the issue to light.

“We wouldn’t have known without him,” she said.

A push for reparations

Sid Whiting Jr., a member of the Sican’gu Lakota Tribe who works for Denver Public Schools, said he wants less press conferences and more financial compensation for the harms inflicted on Native people in the past.

“How many of those ancestors of ours would have had children, and I could have been standing here next to one of them,” said Whiting, who also sits on the Native American Community Advisory Board at the University of Denver. “Instead, they’re gone.”

“When I say reparations, I’m talking about Isaac,” he said, pointing to a student who is a senior in Denver Public Schools and will soon be attending DU. “It’s about funding for our students to be able to get a proper education. And talking about getting our lands back so we can put a cultural center there and so that the direct assets that it gains go to the indigenous communities.”

Ragona, with the Native American Rights Fund, would also like to see the lands that were stolen from Indigenous people returned to them.

“It’s time for the tribes to start claiming and receiving the land that’s rightfully ours,” he said.

The pandemic has been hard. It's been harder on immigrants. by Faith Miller November 17, 2021
Some Colorado school districts adjust to the absence of… by Julia Fennell October 7, 2021
Governor candidate Greg Lopez wants to pause sales tax in… by Sara Wilson June 21, 2022