President Joe Biden delivers a speech on Nov. 10, 2021, at the Port of Baltimore in celebration of the passage of his $1.2 trillion infrastructure bill. (Hannah Gaskill/Maryland Matters)

A version of this story originally appeared in Maryland Matters.

As the sun began to set over the Port of Baltimore late Wednesday afternoon, President Joe Biden announced that, after many years of political impasse, “infrastructure week has finally arrived.”

“Last week, we took a monumental step forward as a nation and we did something long overdue and long talked about in Washington but almost never actually done: The House of Representatives passed my bipartisan infrastructure bill,” the president said during a speech Wednesday.

Biden’s visit to the Port of Baltimore — which he called “one of the oldest … and one of the best ports in the country” — followed Friday night’s Congressional approval of a $1.2 trillion infrastructure bill poised to invest in renewable energy, replace lead water pipes and revamp roads, bridges, rail, airports and ports across the country.

Biden said the focus of his infrastructure bill is lowering the cost of goods, eliminating the supply chain shortage and “getting a lot of people back to work while … tackling these two challenges.”

“This work is going to be critical as we implement the infrastructure bill and as we continue to build the economy from the bottom up and the middle out by passing the Build Back Better plan,” the president said.

According to Sen. Chris Van Hollen (D-Md.), about $7 billion of the $1.2 trillion legislation will go to Maryland over the next five years.

Biden said that the Port of Baltimore will receive a $125 million grant to renovate the Howard Street Tunnel to allow double-stacked trains to run to and from the port.

“To use a G-rated version of what Vice President Biden once said: This bill is a, quote, big darn deal,” Van Hollen said at the 315-year-old port Wednesday afternoon.

Republican Maryland Gov. Lawrence J. Hogan Jr. touted the Port of Baltimore’s growth Wednesday, noting the role it has played in ongoing supply chain issues, its swelling cargo volumes, the forthcoming renovation of the Howard Street Tunnel and the addition of a second 50-foot container berth and four Neo-Panamax cranes.

“Mr. President, we are thrilled that the Port of Baltimore will be a beneficiary of the new bipartisan infrastructure bill, which will help us make even more critical investments here at the port and in our roads, bridges, tunnels, airports, waterways, in broadband and our cyber defense,” Hogan said as he kicked off Wednesday afternoon’s event. “This landmark bipartisan legislation will help us grow jobs, expand economic opportunity, and enhance security.” 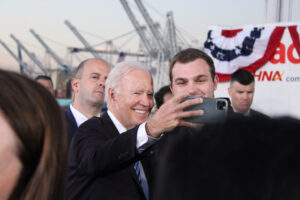 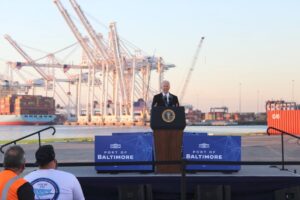 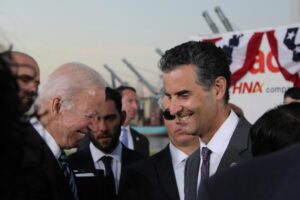 During his speech Wednesday and in a Saturday morning statement following the passage of the bill, Hogan, the lone Republican lawmaker to speak during Biden’s visit, took some credit for pushing the federal legislation forward.

“After decades of gridlock, I’m proud to have helped push the federal government to finally act,” Hogan said Saturday. “When the conventional wisdom said that a bipartisan infrastructure bill was a pipe dream, we hosted the Annapolis infrastructure summit with a bipartisan group of governors, senators, and members of the House Problem Solvers Caucus where we hammered out a compromise on the scope of this bill.”

Colorado to receive billions from infrastructure bill for climate-resiliency projects

Democratic lawmakers acknowledged the “decades of gridlock” Wednesday and praised Biden for being the president to push the investment in American infrastructure over the finish line.

“A lot of presidents over a lot of years talked about investing in America’s infrastructure,” Rep. John P. Sarbanes (D-Md.) said. “President Biden was the one who got it done.”

In the lead-up to Biden’s speech Wednesday, lawmakers emphasized the economic opportunity and job growth that the bill promises.

“Not $12 an hour, not $15 an hour — 45 bucks an hour and up with good benefits so you can raise a family on and build the middle class out,” he said. “And jobs that can’t be outsourced; you can’t outsource these jobs.”

The president also emphasized that the jobs created won’t require a college education.

“This is the ultimate blue-collar blueprint to rebuild America,” he said.

The president, whose family served as watermen in Baltimore over a century ago, ended his speech recognizing the longshoremen in attendance.

“There’s an old expression up in Claymont, Delaware, where I was from: Y’all brung me to the dance, man,” Biden said.

Hannah Gaskill is a reporter for Maryland Matters, a Newsline sibling site. She received her master’s of journalism degree in December 2019 from the University of Maryland. She previously worked on the print layout design team at The Diamondback, reported on criminal justice in Maryland for Capital News Service and served as a production assistant for The Confluence — the daily news magazine on 90.5 WESA, Pittsburgh’s NPR member station.

Guide: Colorado colleges and universities issue COVID rules by Julia Fennell August 12, 2021
Settled into new homes, refugees in US say they are… by States Newsroom Staff June 21, 2021
'We have the watch': Stories from inside NORAD on 9/11 by Emma Athena September 8, 2021