Up to 1,000 homes burned, no lives lost in Boulder County fires

Marshall Fire the most destructive in state history

Homes are burned in the Rock Creek neighborhood of Superior, as seen on Dec. 31, 2021. (Courtesy of Bill Wright)

The Marshall Fire in Boulder County, propelled by winds of up to 110 mph and fueled by dry grass, tore through up to 1,000 homes but so far doesn’t appear to have claimed any human lives, according to Gov. Jared Polis and other officials who spoke at a press conference Friday morning. It’s the most destructive fire in Colorado history.

Believed to have been caused by electrical lines that were blown down, the fire started on Thursday afternoon and by Friday morning was not expected to grow beyond its 6,000-acre extent. Crews on Thursday also responded to the Middle Fork Fire, just north of Boulder around North Foothills Highway and Middle Fork Road.

Officials during the press conference — which included Boulder County Sheriff Joe Pelle, Lafayette resident Rep. Joe Neguse, and Sen. Michael Bennet — struggled to capture in words the ferocious speed and scale of the fires, which were unusual for occurring so late in December and in a highly developed suburban area.

“Unprecedented,” is how Neguse described the flames. “They moved through neighborhoods with a speed and a magnitude like we have never seen before. And we know already that the damage will be costly and disastrous.”

Polis said, “There’s no technology or equipment that’s available to have halted this kind of fire in its tracks.” On Thursday, Polis had said the fire moved so fast it sometimes overtook an area the size of a football field “in a matter of seconds.”

Experts already are pointing to climate change as a main factor in Thursday’s events. “The terrible firestorm was a result of a very warm, dry period combined with an extreme high wind event. There is a clear connection to CLIMATE CHANGE!” tweeted Denver meteorologist Mike Nelson.

Responders were still in the early stages of performing structure-to-structure damage assessments, and residents who were evacuated were precluded from returning to their homes. Pelle said it would take “at least a day” to carry out the assessments, after which staff will post a map at the website of the Boulder Office of Emergency Management showing structure status by address.

Pelle characterized the number of destroyed homes by saying, “I would estimate it’s going to be at least 500 homes. I would not be surprised if it’s a thousand.”

The worst-hit areas appear to be in the north part of Superior and southern Louisville. Both communities, comprising more than 30,000 residents, were evacuated Thursday. Every one of the 370 homes in Superior’s Sagamore neighborhood appear to have been burned. In Old Town Superior, as many as 210 homes were lost. Many businesses were also destroyed. Superior Marketplace, a shopping plaza that includes a Super Target, burned, and the Element hotel in Superior was “fully engulfed.” 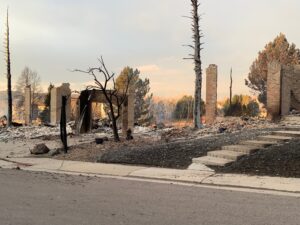 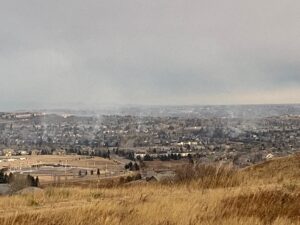 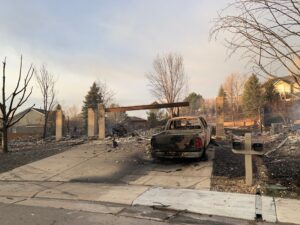 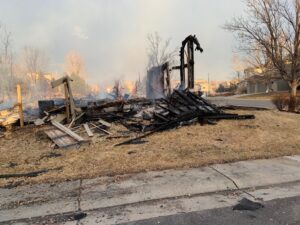 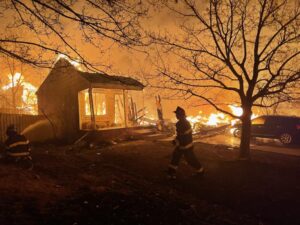 Dozens of evacuated Superior residents and friends of residents gathered Friday morning on a ridge along Colorado 128 south of Superior’s Rock Creek subdivision, which offered a panoramic view of smoldering neighborhoods. They scanned the scene, trying to determine the condition of their homes. One woman asked Denver Post photographer RJ Sangosti to zoom in on a home so she could assess it on his camera’s digital screen. She burst into tears when she saw that it appeared to have survived.

Jola Gaik, who lives with her daughter in Rock Creek, similarly determined with the aid of binoculars that she would have a home to return to. She had been working in nearby Erie when flames approached her neighborhood, and had seen the fire from afar.

“It looked horrifying and devastating,” she said. “It is the most horrible thing you can see.”

An evacuation order barred her from returning home and, having stayed at a friend’s house in Arvada, she was still in the clothes she was wearing Thursday. A neighbor had rushed into her home to collect important documents for her.

Bill Wright and his wife have lived in Rock Creek since 1994. At around the time the fire started he was on his way to aid a friend who was climbing on the Flatirons and, hampered by high winds, needed help. Wright’s wife had also left their house before the fire swept through the neighborhood. On Friday morning he arrived at the ridge south of Rock Creek and, after he and another resident walked into the neighborhood, determined that his house had survived. He said damage in Rock Creek was intermittent.

“When a house got hit it’s completely gone to nothing but brick, pillars, I mean flat,” he said. “So if you burned, you’re gone completely. Nobody’s got partial damage.”

He also found many homes that were completely untouched. In some areas, homes on one side of the street were standing, but on the other side there was nothing left.

When asked how he feels now about living in the area, Wright said, “You know, you see all those fires of people living up in the mountains and the forests, and I’m like, ‘You know, that sucks for those guys for sure, but like, you live in a forest. There’s going to be a forest fire.’ … But we’re out here in the freaking plains. I didn’t think we had enough to possibly burn.”

Polis on Thursday declared a state of emergency, and FEMA approved a federal Fire Management Assistance Grant in response to the fire. President Joe Biden on Friday approved a major disaster declaration, “which will be critical in terms of bringing federal resources here to Boulder County and to the many homeowners who have lost so much, for folks who are looking for housing assistance, small business assistance and so forth,” Neguse said.

Polis spoke with Biden on Friday morning. “The president assured him that every effort will be made to provide immediate help to people in the impacted communities,” according to the White House.

Officials expressed amazement over how no one appears to have died in the fire.

“We might have our very own New Year’s miracle on our hands if it holds up that there was no loss of life,” Polis said.

“It’s unbelievable when you look at the devastation that we don’t have a list of a hundred missing persons, but we don’t,” Pelle said. “So, again, I’m hoping that’s a miracle, because it would be, given the circumstances.”

The Boulder Office of Emergency Management is providing updates on evacuations and other fire information.

Ways to offer response assistance can be found at coloradoresponds.org.

Up to 1,000 homes burned, no lives lost in Boulder County fires

Colorado arrives at the dawn of megafires by Allen Best July 12, 2021
Guide: Colorado colleges and universities issue COVID rules by Julia Fennell August 12, 2021
The pandemic has been hard. It's been harder on immigrants. by Faith Miller November 17, 2021