Election-year legislative session kicks off with politics on full display

Speaker Alec Garnett leads off the start of the second regular session of the 73rd General Assembly, Jan. 12, 2022. (Carl Payne for Colorado Newsline)

Colorado’s 2022 legislative session kicked off as scheduled on Wednesday against a backdrop of record-breaking COVID-19 infections and as Democrats — who enjoy a comfortable majority — promised to focus on public safety, education and the rising cost of living.

Republicans unveiled their own policy agenda, which would deploy different strategies aimed at solving the same challenges.

Opening day began with an a capella performance of the national anthem by the University of Denver’s Lamont Chorale, and a recitation of the pledge of allegiance led by House Speaker Alec Garnett’s young niece and two of his small children. But despite the light moments, a pandemic-shaped cloud hung over the normally festive first day.

“From the very beginning, our tenure has been shaped by the hands of history,” Garnett, a Denver Democrat, said in his speech on the floor of the House of Representatives. He referred to the still-roaring coronavirus pandemic that nearly two years ago forced the Colorado General Assembly to suspend lawmaking for six weeks in the middle of the session.

In the House, no Republicans could be seen wearing masks while seated at their desks on the floor, despite a Tuesday memo from legislative leaders strongly encouraging members to wear face coverings regardless of vaccination status. While some Republicans wore masks in the Senate, the 30 or so House and Senate Republican lawmakers present for a noon press conference abstained from face coverings.

Democrats, who hold a wide majority in the House and a slimmer one in the Senate, all appeared to be wearing masks throughout the day. Legislative staff, lobbyists and members of the public are required to wear face coverings in the House and Senate chambers.

“I think what you’re seeing, at least from Republicans, or maybe all members, is that we’re probably bringing to the Capitol the policies that currently exist in our current districts,” Senate Minority Leader Chris Holbert, a Douglas County Republican, told Newsline. “In Douglas County, there is no mask mandate.” 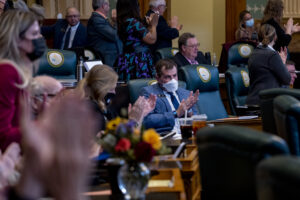 Colorado House of Representatives members clap during remarks made at the second regular session of the 73rd General Assembly, Jan. 12, 2022. (Carl Payne for Colorado Newsline) 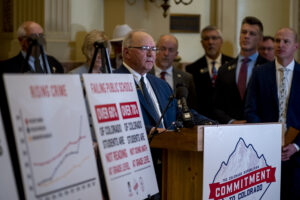 Colorado Republicans speak on a "Commitment to Colorado" campaign at a press conference following the start of the second regular session of the 73rd General Assembly, Jan. 12, 2022. (Carl Payne for Colorado Newsline) 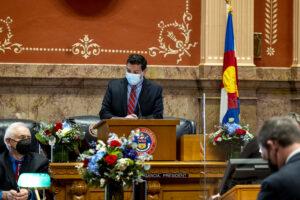 Colorado Senate President Leroy Garcia speaks at the podium before the start of the second regular session of the 73rd General Assembly, Jan. 12, 2022. (Carl Payne for Colorado Newsline) 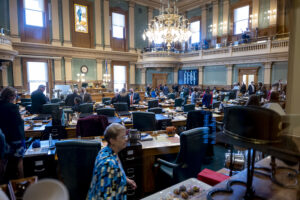 Inside the Colorado House of Representatives at the start of the second regular session of the 73rd General Assembly, Jan. 12, 2022. (Carl Payne for Colorado Newsline)

Colorado Sen. Cleave Simpson holds his grandson before the start of the second regular session of the 73rd General Assembly, Jan. 12, 2022. (Carl Payne for Colorado Newsline) 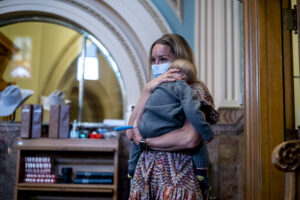 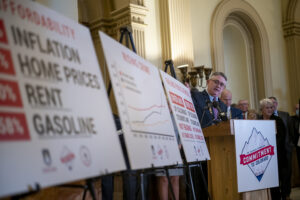 Colorado Sen. Chris Holbert speaks on a "Commitment to Colorado" campaign at a press conference following of the start of the second regular session of the 73rd General Assembly, Jan. 12, 2022. (Carl Payne for Colorado Newsline) 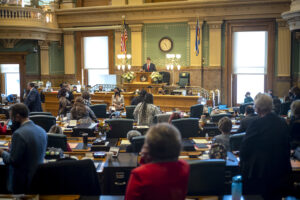 Holbert added that he was grateful to Gov. Jared Polis for not implementing a statewide mandate. While Denver has a mask mandate in place until at least Feb. 3, there’s currently no statewide order that would cover the Capitol complex.

“If you’re wearing a mask and I’m not, I respect your decision,” Holbert said, noting that masks can make public speaking difficult. “I hope you respect mine.”

A handful of state representatives — including Democratic Reps. Tracey Bernett of Louisville, Dafna Michaelson Jenet of Commerce City and David Ortiz of Littleton and Republican Rep. Andres Pico of Colorado Springs — attended the first day of session remotely, their faces projected on a screen in the House chamber.

Like much of the rest of the nation, Colorado is in the midst of a surge in COVID-19 infections driven by the rapidly spreading omicron variant. CDC Director Rochelle Walensky has emphasized that most of the deaths the variant has caused are among people with multiple pre-existing conditions. Her comments faced backlash from disability rights advocates including Ortiz, who uses a wheelchair.

Excited to kick off first day of session.

In light of #Omicron numbers and CDC being “encouraged” that this variant only deeply impacts the disabled and co-morbidities, and that I can’t depend on all my peers to do what they can to keep me safe. I will be virtual at 1st. #coleg pic.twitter.com/jRH9doduvC

“Excited to kick off first day of session,” Ortiz tweeted Wednesday morning. “In light of #Omicron numbers and (the Centers for Disease Control and Prevention) being ‘encouraged’ that this variant only deeply impacts the disabled and co-morbidities, and that I can’t depend on all my peers to do what they can to keep me safe. I will be virtual at 1st.”

More than 13,500 new cases were reported on average each day of the week ending Monday. A lag in reporting, due to high demand for testing, means that total could increase significantly in coming days.

On Wednesday, Colorado’s COVID-19 hospitalizations surpassed last fall’s peak. There were 1,577 people hospitalized with COVID-19 as of Wednesday, according to state epidemiologist Dr. Rachel Herlihy.

Unlike in some previous years, Republicans and Democrats want to focus on the same policy areas — affordability, education and public safety — and during their opening speeches, leaders of both parties promised they had the solutions.

Some lawmakers in the minority signaled their agreement with Garnett’s choices about what to highlight in his speech.

During Garnett’s remarks about plans to improve public safety, several Republicans, including House Minority Leader Hugh McKean, joined Democrats in applause on multiple occasions. They were more reserved during a section of Garnett’s speech focused on addressing climate change and poor air quality.

Both sides of the aisle clapped loudly during Garnett’s comments on decorum. Notably, the 2021 session was marked by high-profile incidents involving racist jokes and name-calling by Republican lawmakers who made national news.

“We’re not elected to bicker or squabble,” Garnett said. “We’re elected to govern and lead. It’s up to us to restore people’s faith in government.”

McKean’s speech unloaded blistering criticism of Democrats’ prior legislative actions, seeking to place the blame on the party in power for inflation, the rising cost of living and increasing crime.

He highlighted a transportation package that faced stiff opposition from Republican lawmakers last year despite support from many local leaders around the state. The legislation, Senate Bill 21-260, instituted a “road usage fee” that, by Republican arguments, will function like an increase in the gas tax, meaning it should be subject to a vote of the people under a constitutional amendment that requires Colorado voters to weigh in on tax increases.

Democratic Gov. Jared Polis and leading Democrats in the state Legislature have said they want to delay the implementation of the fee until 2023. McKean and others in his caucus want to get rid of it altogether. It’s unclear whether or how the various transportation system improvements included in SB-260 would be funded without the road usage fee, but Republicans have emphasized its future impact on consumers who are currently facing record-high gas prices.

After leaders’ opening speeches in the House and Senate, Republicans from both chambers gathered on the first floor of the Capitol to announce their agenda for the election-year legislative session. The GOP lawmakers said they would introduce 44 bills to address three main areas: the high cost of living, rising crime and “failing” public schools.

Holbert accused Democrats of “copying and pasting” those three main pillars, which Republicans first announced in August, for their own platform. He also blamed Democratic policies for the rising costs of rent, food and fuel.

“Democrats made things more expensive for most people in Colorado,” Holbert said.

None of the 44 Republican bills currently has Democratic sponsorship. While a Republican-led bill couldn’t pass without Democratic support, every bill — regardless of its chances of passing — must get a committee hearing where lawmakers can argue for their policy priorities and members of the public can testify in support or opposition.

Rep. Chris Kennedy, a Lakewood Democrat, argued that his caucus had been working for years on policies to improve affordability.

“What I’ve seen is (Republicans) consistently stood with insurance companies and Big Pharma and other big corporations on things that Democrats have done over the past several years to try to bring down the costs of health care, housing and a variety of other things,” Kennedy told Newsline.

Kennedy was skeptical about Republicans’ true intentions when it came to tax credits they proposed. For example, one Republican-led bill that was mentioned at the news conference would allow Coloradans to receive an income tax deduction equal to the cost of their rent payments.

“One thing I’ve commonly seen from the Republicans is they say they want to give help to lower-income folks, but they only do it if you can give even more help to higher-income folks,” Kennedy said. “So when you talk about these tax credit proposals, I’m going to be very curious to see the means test, or whether they want to give away this to everyone regardless of income — because that is a rapid drain on our finances and makes all of these ideas untenable.”

Election-year legislative session kicks off with politics on full display

Faith Miller was a reporter with Colorado Newsline covering the Colorado Legislature, immigration and other stories.

The Ghost of an Idea: A reflection on Charles Dickens and… by David DeWitt December 25, 2022
Pam Anderson wants to run 'evidence-based' elections if… by Sara Wilson September 15, 2022
Governor candidate Greg Lopez wants to pause sales tax in… by Sara Wilson June 21, 2022