Proposed Colorado law would expand worker protections beyond the pandemic

This story originally appeared at Stateline, an initiative of The Pew Charitable Trusts.

Contractors and subcontractors who spoke to Stateline on condition of anonymity for fear of retaliation said supply chain issues and other COVID-19-related delays put the warehouse construction behind schedule. In the rush to complete the project on time, they said, safety standards fell by the wayside.

Amazon did not respond to multiple requests for comment.

“Everyone that’s spoken up has been fired for holding up production,” said a contractor who spoke to Stateline on condition of anonymity. “It’s going to sound bad, but whistleblowing is not going to pay my bills.”

Federal and state agencies tasked with enforcing workplace safety rely on whistleblower complaints, but the agencies are so understaffed it can take years for complaints to be investigated, experts say. Advocates say the delays and the stigma associated with whistleblowing dissuade most workers who witness unsafe conditions from speaking up.

Despite this, the federal Occupational Safety and Health Administration, known as OSHA, the enforcement arm of the U.S. Department of Labor, received more than 4,600 whistleblower complaints in fiscal 2021, more than double the average number of complaints made over the previous five years. More than half were related to COVID-19.

But complaints to federal and state authorities rarely result in fines or legal action, especially in states such as Texas where there are no state-enforced worker protections. That leaves countless workers at risk of serious injury or death, experts say. Texas falls under federal OSHA rules; the agency did not respond to multiple requests for comment on this story.

Jose Rodriguez, a previous safety inspector at the Fort Worth Amazon site, was fired by his consulting company shortly after reporting health and safety issues at the site in February 2021. He was still looking for work when Stateline spoke to him in December.

“I did what I had to do to save people from getting badly injured or from losing their lives, and I’d do it again if I had to,” Rodriguez said. “But I’ll tell you what, it’s hard to find employment when you’ve been branded as the whistleblower.”

Colorado state Rep. Leslie Herod, a Democrat and primary sponsor of the bill in her state, said protecting whistleblowers is about saving lives.

“I’d say that it’s imperative that we have these remedies and protections for those who raise health and safety concerns,” she said. “Workers are not protected right now without these laws.”

Rodriguez said OSHA could not help him recoup any lost wages or compensation, even though he followed the agency’s protocols when he reported the safety hazards at the Amazon construction site in Fort Worth. He said an agent at the regional office told him there was nothing they could do for him because he was hired as an independent contractor.

“It was basically an open-shut case for me,” Rodriguez said.

The 1970 law that created OSHA guarantees all employees a safe workplace, the right to report unsafe conditions and the right to refuse hazardous work. The reality rarely lives up to that ideal, said Stephen Kohn, an attorney and chair of the board of directors at the National Whistleblowers Center, an advocacy group.

Kohn said in the past 35 years he’s worked with thousands of whistleblowers, but he’s never recommended that any of them file an OSHA complaint. “I know walking in that the odds that this worker will get satisfaction out of OSHA is like 1 in 100, but the odds they are stigmatized for filing the complaint are 100%.”

In fiscal 2021, OSHA made determinations in 2,263 whistleblower complaints under the Occupational Safety and Health Act, the highest number since at least 2016, according to agency data. OSHA dismissed 54% of complaints and took legal actions in about 27%. Only 21 cases, less than 1%, were found to have merit, meaning the agency asked for the employee to be reinstated or paid for damages, administration data shows.

Kohn noted that under federal law, whistleblowers must file a complaint within 30 days of the violation, and workers don’t have a private right of action, meaning they can’t sue their employer if they are fired for speaking up. Only the U.S. Department of Labor or the 22 states that have their own OSHA plans that cover private employers can file lawsuits. The federal OSHA approves and monitors all state plans and provides up to 50% of the funding for each program. 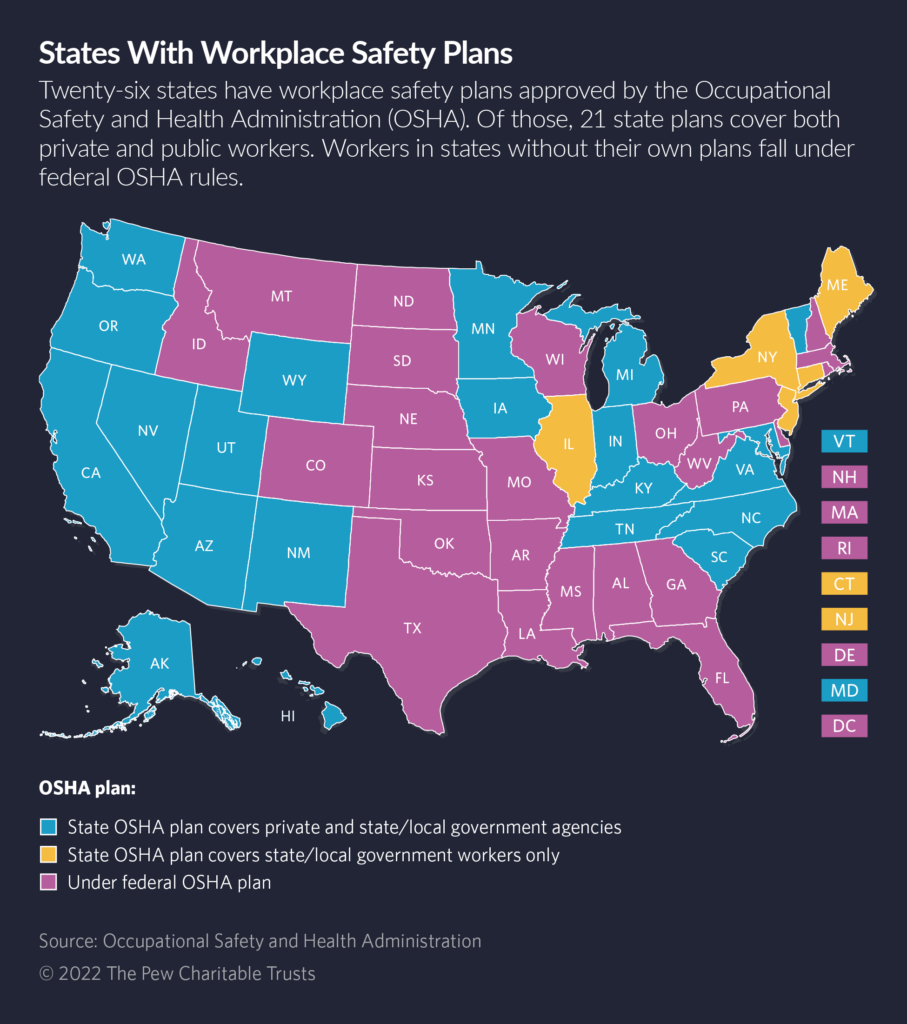 Some states provide protections over and above those offered by the federal government. California, for example, has enacted 53 laws that protect workers from retaliation and discrimination, according to state officials. Of the states considering added whistleblower protections, only Arizona, Minnesota and Washington’s plans cover private employers.

Debbie Berkowitz, a former OSHA chief of staff and senior policy adviser under President Barack Obama, said in the 24 states without their own OSHA plans, it is nearly impossible for federal officials to enforce worker safety and health laws.

“Workers can only enforce their rights under the law by asking OSHA to inspect, and OSHA resources are so scarce that it would take 160 years to inspect every workplace under its jurisdiction just once,” Berkowitz said in an interview.

A 2020 report by the National Employment Law Project, a workers’ rights advocacy group, found the number of federal OSHA inspectors had fallen to a 45-year low. At the beginning of 2020, OSHA had only 862 inspectors to cover millions of workplaces. That was down from 952 inspectors in 2016 and 1,006 inspectors in 2012, according to the report.

“Most workers can’t wait a few years,” said Berkowitz, adding that OSHA’s Whistleblower Protection Program is virtually useless. “These protections, the program, is a farce.”

Colorado’s new law allows the state’s Department of Labor and Employment to seek remedies on behalf of workers and expands the statute of limitations to two years. But the new law protects workers only during a public health emergency, which Democratic Gov. Jared Polis declared in March 2020 at the outset of the pandemic and lifted in July.

At least 126 complaints alleging retaliation have been filed since the new law went into effect in July 2020. As of two weeks ago, the department had reviewed 96 complaints and issued 33 right to sue notices, according to Herod.

On Feb. 1, Herod and three other Democratic lawmakers introduced a version of the 2020 bill that would expand its protections beyond the pandemic.

“The pandemic exposed many health and safety concerns in the workplace, but those concerns existed long before COVID and will continue to exist after the emergency declaration and after we are through this pandemic,” Herod said.

More than 1 in 4 U.S. workers said fear of employer retaliation might prevent them from reporting unsafe conditions, according to an August report by the National Employment Law Project that surveyed 3,100 workers in all 50 states.

Workers in New York were most likely to fear reprisal, according to the report.

New York state Sen. Jessica Ramos, a Democrat and primary sponsor of the bill, said she heard from her constituents about dangerous working conditions at construction sites where developers were accelerating projects that had been delayed by pandemic-related shutdowns.

Ramos said most of the calls were coming from Ecuadorian men in her district, which includes part of Queens.

“So often this country thinks of Latinx lives as disposable, and we’re not,” Ramos said. “Our only purpose in life is not to work for you.”

Last February, Rodriguez — then a certified safety inspector at Amazon’s new Fort Worth site — filed a complaint against Amazon and a half dozen contractors and subcontractors involved in the construction of the online behemoth’s new warehouse.

Rodriguez, who worked for California-based Safety 1st Consulting, sent a detailed report to the federal OSHA, including photos of workers walking on elevated conveyor belts without wearing a harness and laborers working on dimly lit, uneven platforms.

Safety 1st Consulting fired Rodriguez shortly after he filed his complaint. Safety 1st did not respond to multiple requests for comment.

Rodriguez waited for OSHA to respond, but after a week with no answer, he called the local newspaper and shared the evidence he’d provided to federal regulators, even though he knew he’d be blacklisted by construction companies.

Rodriguez said he was not surprised that similar safety violations were still taking place six months after he was fired.

“Injuries and fatalities are daily workplace hazards,” he said. “At the end of the day I just want companies to be held accountable so that all workers can return to their home safely.”

Texas, which doesn’t have its own OSHA plan, had 469 workplace deaths in 2020, more than any other state. Hispanic or Latino employees had the highest number of fatal injuries with 221 incidents — 47% of all fatalities. Construction workers suffered the most casualties with 127 fatal injuries, according to an annual report by the Texas Department of Insurance, the state department responsible for tallying worker deaths in the state.

In March 2021, after Rodriguez filed the complaint against employers at the Amazon site in Fort Worth, OSHA fined CJ Rack Installation Inc. — the company hired to install thousands of four-story tall racks in the warehouse — $2,386 for serious violations involving the use of a forklift and a scissor lift, according to documents obtained by Stateline.

CJ Rack did not return multiple requests for comment.

He said Texas’ employer-friendly laws and courts leave workers like Rodriguez no choice but to go to federal OSHA for safety and health complaints. But OSHA fines and investigations are so rare and insignificant that employers just accept them as a cost of doing business, he said.

“It’s been a horrific problem for decades, and it’s not getting any better,” Thomas said.

“It’s going to require, at least in Texas and I’m assuming it would be similar elsewhere, for the voting population to demand from their elected officials that they provide these kinds of protections that they recognize the risk and exposure to human beings.”

Kristian Hernández writes about social services and housing for Stateline and reports from Texas. Before joining Stateline, he was an investigative reporter for the Fort Worth Star-Telegram and the Center for Public Integrity. Previously, he was an immigration reporter for The Monitor newspaper in South Texas and a courts reporter for Homicide Watch in Washington, D.C. Hernandez is a first generation Mexican-American with a bachelor’s degree in multimedia journalism from the University of Texas at El Paso and a masters in investigative journalism from American University.

States target ballot drop boxes in fight over voting rights by Kira Lerner February 9, 2022
The Ghost of an Idea: A reflection on Charles Dickens and… by David DeWitt December 25, 2022
America is in the middle of a labor mobilization moment by John Logan September 5, 2022