After a wave of bankruptcies and mergers, oil companies commit to prioritizing ‘shareholder returns’

A pump jack is seen in Frederick on June 24, 2020. (Andy Bosselman for Colorado Newsline)

As the global oil market continued to be rocked by the fallout from Russia’s invasion of Ukraine, Denver-based drilling giant PDC Energy on Monday held a conference call with investors to tout its latest acquisition and lay out its financial and operational plans for 2022.

The message delivered to shareholders by chief financial officer Scott Meyers was clear: Soaring prices are unlikely to impact PDC’s drilling activity in the near future — but they’re sure to mean more money in investors’ pockets.

“We’ve tried to articulate the manner in which we will execute our return of capital initiatives in various commodity-price worlds,” said Meyers, pointing shareholders to a slide that outlined three different possible financial strategies. “As you can see, in all of the prices, our first commandment is to honor the base dividend.”

“Sitting here today, we’re obviously in a bullish price environment,” he added, referring to the surge in U.S. oil prices to nearly $110 a barrel, an eight-year high. “Meaning we’ll aim to meet our 60% post-dividend commitment, predominantly through share buybacks.”

The global energy shock caused by the invasion of Ukraine by Russia, from which the U.S. imports more than 500,000 barrels of crude oil daily, has prompted new calls from across the political spectrum for more domestic drilling to bring down gasoline prices, or even to achieve “energy independence.” Republican Rep. Lauren Boebert, who represents Colorado’s 3rd District, spoke for many in her party by wearing a shawl emblazoned with the words “Drill Baby Drill” at Tuesday’s State of the Union address.

But in Colorado and beyond, large oil companies currently reporting their 2021 financial results and 2022 outlooks to shareholders are pledging to continue holding back on new production as they prioritize positive cash flows and capital returns for investors.

The increased dividends and stock buybacks are part of what executives at PDC, Colorado’s third-largest oil producer, called its “new return of capital framework,” and the company is far from alone. Occidental Petroleum, the state’s top producer, also detailed its “new shareholder return framework” in a January earnings call, while the newly-formed Civitas Resources has touted an “updated stockholder distribution strategy.”

After plummeting amid a demand shock in the early days of the COVID-19 pandemic, U.S. oil production is rising again — but slowly. A forecast last month from the federal Energy Information Administration projected that daily domestic production wouldn’t return to pre-pandemic levels until late 2023.

In its 2022 financial guidance this week, PDC projected that its oil production in Colorado would dip by 7% in the first quarter and grow at an overall rate of zero to 5% for the next two years. PDC assured investors, however, that “under the company’s enhanced return of capital framework … cumulative shareholder returns in 2022 and 2023 are expected to exceed $1.7 billion.”

‘We’re not going to change our growth plans’

Beginning in the late 2000s, the U.S. oil and gas industry underwent what was dubbed the “shale revolution” — a dramatic production boost enabled by new technologies like horizontal drilling and advanced hydraulic fracturing, better known as fracking.

In Colorado, the shale revolution brought a staggering six-fold increase in oil production between 2010 and 2019, nearly all of which came in the Denver-Julesburg Basin in the northeast quarter of the state. The drilling boom in Colorado and elsewhere helped drive down gas prices throughout much of the decade, and in 2018 made the U.S. the world’s top oil producer for the first time since 1973.

But independent financial analysts had long questioned the sustainability of shale drilling, also known as “unconventional” production. The new drilling techniques were expensive, requiring large capital and operating expenditures and tight margins that made producers vulnerable to price volatility. Wall Street investors funneled large amounts of cash into the fracking boom in the early 2010s, but gradually soured on the industry as many operators racked up debt and unconventional wells struggled to produce enough oil and gas to be profitable.

While COVID-19’s impact on the oil and gas sector was what made headlines, a financial reckoning was already well underway in early 2020, reshaping the industry through a wave of bankruptcies, mergers and acquisitions that began before the onset of the pandemic and has continued long after. 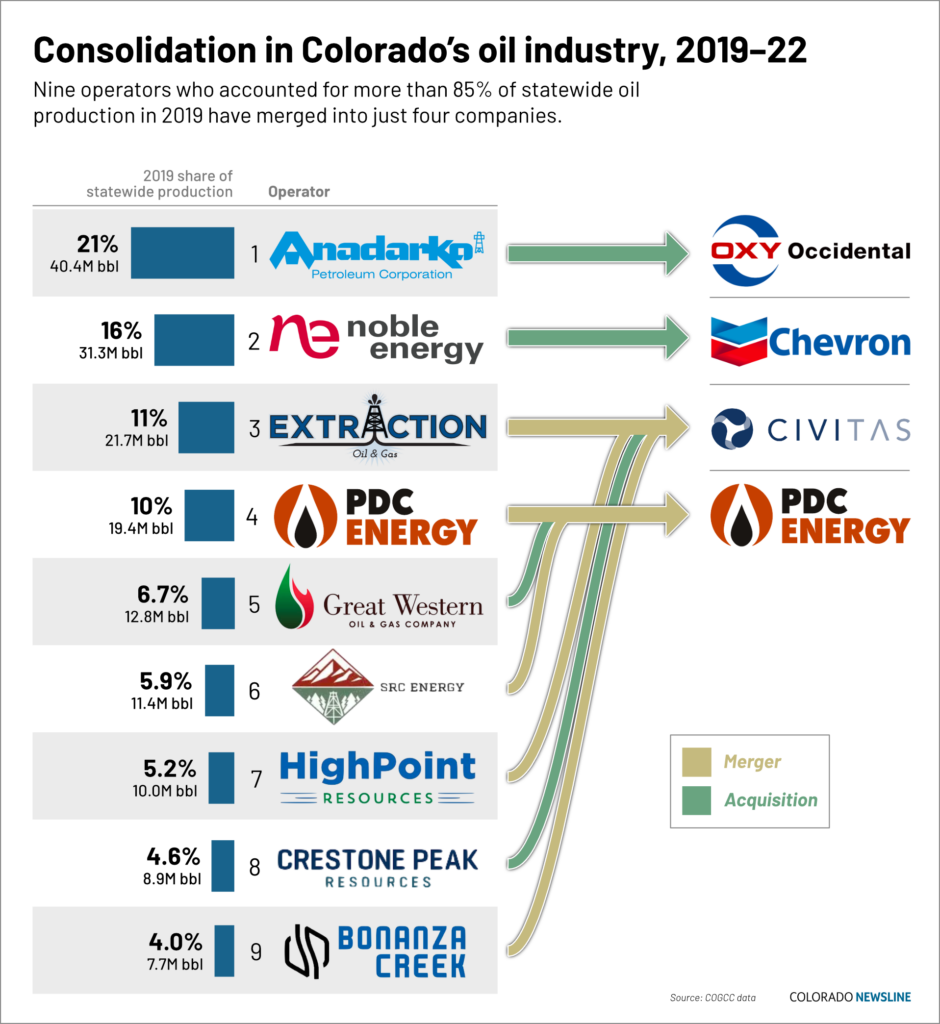 In Colorado, the latest upheaval came with PDC’s announcement on Monday that it had acquired Great Western Petroleum, the state’s fifth-largest oil producer in 2021, in a $1.3 billion deal. The acquisition means that over the last two years, seven of the nine largest oil producers in Colorado have combined into just two companies — PDC and Civitas. Meanwhile, Anadarko Petroleum and Noble Energy, the state’s No. 1 and No. 2 producers as of 2019, were each sold to larger multinational corporations — Occidental and Chevron, respectively.

For the most part, these newly consolidated companies are heeding Wall Street’s calls to reinvest less money in expanding production and instead increase returns for shareholders. Civitas, which will release its end-of-year results and 2022 guidance next week, pitched itself to investors in a December presentation as a company “delivering on the new (exploration and production) business model,” touting its cash flows, low leverage and “disciplined capital allocation.”

In Colorado, Boebert has responded to Russia’s invasion of Ukraine by attacking what she called President Joe Biden’s “pathetic energy policies,” and has helped lead a Republican effort urging Congress and the administration to “immediately unleash our full energy potential.”

But the oil and gas industry is currently sitting on more than 9,000 approved permits to drill on federally owned lands across the country, including 543 permits to drill on public lands in Colorado, according to data released last month by the Bureau of Land Management.

The situation is much the same in the oil-rich Denver-Julesburg Basin north of Denver, where most drilling takes place on private lands, according to a Newsline review of operator financial statements.

The Ukraine crisis has prompted some Colorado Republicans to call for the rolling back of state-level oil and gas regulations. Jon Caldara, president of the right-wing Independence Institute, advocated repeal of Senate Bill 19-181, the landmark 2019 law that directed state drilling regulators to better protect health, safety and the environment. Some industry advocates said the new rules that resulted from SB-181, which included a 2,000-foot setback of wells from homes and other buildings, were a “essentially a ban” on new drilling.

But in financial statements and earnings calls — venues in which companies are legally barred from misleading investors — executives have been consistently sanguine about the impacts of the state’s new regulatory regime under SB-181.

PDC’s end-of-year report Monday noted its extensive stockpile of hundreds of approved permits and drilled but uncompleted wells, which it said “represents an inventory life of more than ten years at the current development pace” — and plenty of additional drilling permits for approved surface locations are on their way, including for the locations that the company plans to acquire from Great Western.

In response to a question from an investor, David Lillo, PDC’s senior vice president of operations, said during the company’s earnings call that obtaining subsurface permits from the state “hasn’t really been a big problem in the previous years, even under the new rules.”

Reporter Chase Woodruff covers the environment, the economy and other stories for Colorado Newsline.